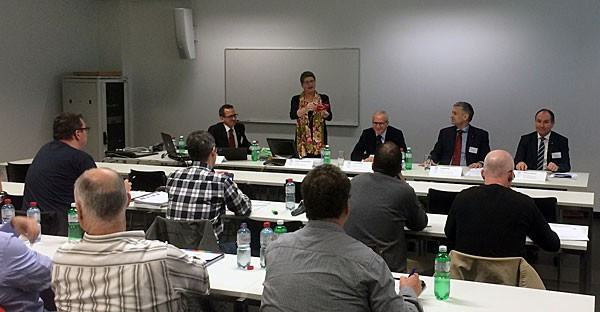 Lucerne’s bid for the 2021 Winter Universiade has been presented to the media ahead of its evaluation by the International University Sports Federation (FISU) next month.

The presentation was made by a delegation including the Swiss city’s councillor Ursula Stämmer-Horst and cantonal councillors Guido Graf and Niklaus Bleiker.

Completing the line-up was Andreas Csonka, President of the Swiss University Sports Federation, and Urs Hunkeler, head of the Bidding Committee, which presented its slogan: "Welcome home!".

It is claimed the slogan refers to the hospitality that is said to have made Central Switzerland internationally famous and to the fact that winter sports have a long tradition in the region.

As early as 1900, people from throughout Europe met in Central Switzerland to ski and the Bidding Committee is looking to continue that tradition.

With a budget of CHF33.5 million (£23 million/$32.7 million/€30.2 million) and an expected added value of approximately CHF70 million (£48 million/$68.4 million/€63.2 million), the bid is considered an investment in the national promotion of sport, the local trade as well as in Central Switzerland's tourism.

It is also hoped it will enhance the city’s reputation as a centre for education and culture.

Lucerne appears extremely likely to become the first Swiss city to host the Winter Universiade for 59 years as they are currently the only bidder.

FISU plans to evaluate the bid, which was officially lodged earlier this month, during a special visit from February 10 until 12.

Providing it meets all of FISU's criteria, the ruling Executive Committee are expected to formally award the Games to Lucerne at its meeting in Brussels on March 5.

Alpine skiing would be held at Stoos, which is located at the foot of the Fronalpstock mountain on a sunny Alpine plateau of the same name about 1,300 metres above Lake Lucerne.

The last time Switzerland hosted the Winter Universiade was in Villars in 1962 when 332 athletes from 23 countries took part.

The next Winter Universiade is due to take place in Almaty, Kazakhstan, in 2017.

The 2019 edition has been awarded to Krasnoyarsk in Russia.