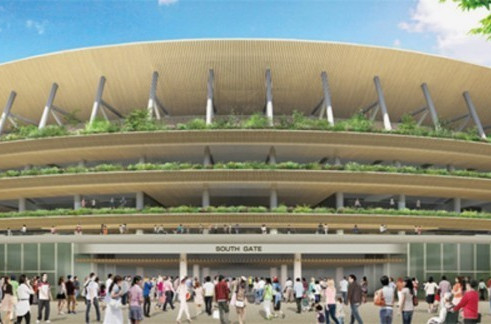 The Japan Sports Council (JSC) has announced it has signed a ¥2.5 billion (£14.5 million/$21 million/€19.1 million) contract with the constructors of Tokyo’s new National Stadium, which is being built for the 2020 Olympic and Paralympic Games.

The agreement was reached between the joint venture building the stadium, which includes architect Kengo Kuma, construction giant Taisei Corporation and Azusa Corporation, and the JSC after they agreed to meet construction deadlines.

Japanese organisers recently claimed that it would be ready by November 2019 after they brought the deadline for completion of the project forward by two months.

A basic plan is due to be unveiled in May following consultation with the Tokyo 2020 Organising Committee and various sports federations in the country.

The stadium has been a major embarrassment for Tokyo 2020 organisers, with the saga starting when the initial design by Iraqi-British architect Zaha Hadid was axed due to rising costs.

A cheaper design by Kuma has been selected as the replacement, but he has now been embroiled in a plagiarism row with Hadid claiming that his effort has "significant similarities" with hers, which the architect has denied.

JSC board member Takakuni Ikeda moved to allay fears that the plagiarism claims would affect construction, declaring “no matter how the negotiations go with Zaha Hadid Architects, we’ll look to make sure it gets built properly”.

Kuma’s design was put forward by the JSC, who are in charge of the process, and was chosen ahead of a three-way venture comprising Takenaka Corp, Shimizu Corp, and Obayashi Corp, which also involved architect Toyo Ito.

It has, however, also attracted criticism, with one architecture critic claiming the design "looks like a pile of salad plates cleared away before anyone had finished, with bits of lettuce poking out from between the stack of saucers".

The suitability of the venue for elderly and disabled fans has also been questioned but the JSC and Tokyo 2020 remain confident any issues will be ironed out before construction work begins.

It was originally hoped that the stadium would be ready for the 2019 Rugby World Cup in Japan, the first-ever edition of the tournament to be held in Asia, but delays caused by the scrapping of the initial design mean this is no longer possible.