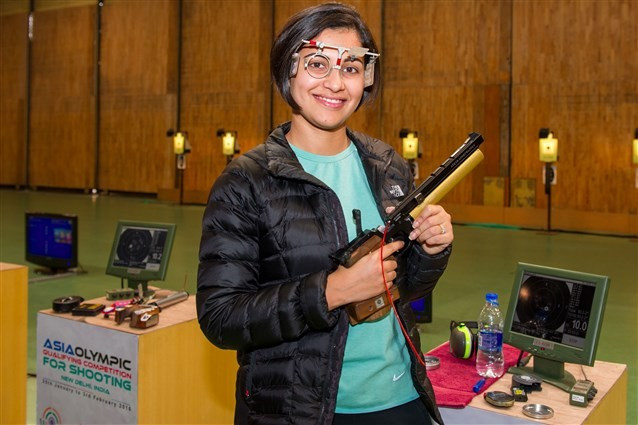 The 26-year-old posted a score of 60.2 points in the first round of the competition in the Dr Karni Singh ranges in Tughlakabad to lead the standings.

Sidhu came under significant pressure from Chinese Taipei’s Chia Chen Tien and South Korea’s Yun Mi Gim in the elimination phase but held her nerve to reach the final shots of the competition with a comfortable 1.1 point cushion over Tien.

The home favourite achieved scores of 10.3 and 10.0 points with her final efforts to extend her margin over victory over her rival to 1.3 points, having ended on a total of 199.4.

Golnoush Sebghatollahi missed out on a podium finish after finishing behind third place Yun Mi Gim but was still able to celebrate earning Iran a Rio 2016 quota place, with Chinese Taipei and South Korea having already earned two places.

A close competition had seen Vea Aree win a shoot-off against South Korea’s Kim Hyeon-Jun to reach the final two of the elimination phase.

He eventually ended 0.2 points behind Jong-Hyun, with the London 2012 50 metre rifle three positions Olympic silver medallist triumphing on a total of 206.3.

Japan’s Yukie Nakayama emerged as the winner in the women’s trap competition, overcoming China’s Li Qingnian in a tie-breaker.

It followed both competitors hitting 12 of the 15 targets during the contest, Li eventually missing the second of the additional targets to end as the silver medallist.

With Japan having already claimed a quota place for Rio 2016, Li’s efforts were rewarded by winning China a berth.

A total of 15 events in the three Olympic Shooting disciplines are being contested at the competition which began yesterday with an Opening Ceremony attended by International Shooting Sport Federation (ISSF) President Olegario Vazquez Raña.

The qualifier was moved to India at short notice in November after the International Olympic Committee (IOC) withdrew their recognition of the Asian Shooting Championships in Kuwait City in response to Kuwait's suspension from the IOC due to Government interference.

In a "direct violation of the non-discrimination principle of the Olympic Charter which must apply for all Olympic qualification competitions", designated ISSF technical delegate, Yair Davidovich of Israel, was also reportedly denied a visa by the Kuwaiti Immigration Department.

As a result Kuwaiti Minister of State for Youth Affairs Sheikh Salman Sabah Al-Salem Al-Homud Al-Sabah, the official responsible for a controversial Kuwaiti law which led to the IOC suspension, as President of the Asian Shooting Confederation.

With Kuwait’s ban remaining in place, their shooters have been entered as Independent Shooting Participants and are competing under the ISSF flag in New Delhi.

“A very warm welcome to all the participants, especially to the 538 shooters,” said Vazquez Raña when he opened the event.

“I’m very proud and happy to be here in the beautiful city of New Delhi for this Olympic Qualifying Competition.

“India and Asia are very important to the shooting sport world, and I’m very satisfied with the progress of our sport within the Asian continent.”