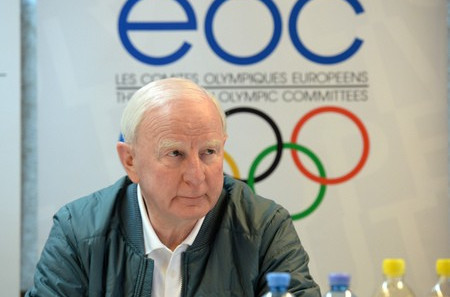 European Olympic Committees (EOC) President Patrick Hickey insists Rio 2016 will be a success once a "touch of carnival kicks in" despite another wave of problems threatening to overshadow the build-up.

Organisers are being forced into budget cuts with Brazil locked in the midst of its worst recession in two decades.

Plans for a floating grandstand with capacity for 4,000 fans at the Lagoa Rodrigo de Freitas rowing and canoe sprint venue have been abandoned this week, while only around half of domestic tickets for the Games have been sold.

There are also fears that concerns held by the Brazilian public over the spending at a time of economic unease will cause opposition to harden.

Hickey, a member of the RIo 2016 Coordination Commission, claims to be unconcerned, and insists that no worries were raised at today's EOC Executive Committee meeting here.

"I think everyone is looking forward to what’s going to be a spectacular Games," the Irishman predicted to insidethegames afterwards.

"I know there are worries about the economy in Brazil et cetera, et cetera.

"But the Brazilians have a great way of celebrating, and we think that a touch of carnival will kick in.

"Every city, ever, for the Games, there’s been doubts and worries about it.

"Going back to Barcelona and Athens, and look what happened, they were all great Games."

Similar concerns dominated the build-up to the 2014 FIFA World Cup in Brazil, particularly after violent protest erupted across the host nation during the previous year's Confederations Cup.

The World Cup was ultimately considered a success, however, with protests remaining minimal and attendances strong.