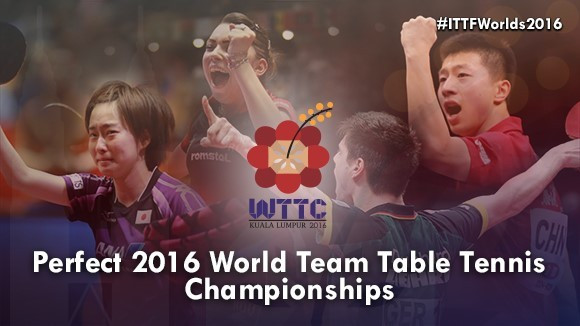 Hosts Malaysia have been drawn against defending champions China in the women’s group stages of the 2016 World Team Table Tennis Championships in Kuala Lumpur.

The match-up was one of the highlights of the group stage draw, which saw 24 men’s and 24 women’s teams each placed into four groups of six for dual tournaments.

China will begin as the overwhelming favourites to win both the men's and women's titles, having achieved the feat at the last two editions of the biennial event in Dortmund and Tokyo.

As well as meeting the host nation in Group A of the women’s event, the Chinese team will also play European champions Romania, Chinese Taipei, Hungary and Spain, as they look to claim a place in the quarter-finals.

Japan, who ended as the runners-up in 2014, will take on Germany, North Korea, Thailand, Brazil and the Czech Republic in Group B, while Group C consists of The Netherlands, Singapore, Poland, Ukraine, France and Belarus.

Each of the matches are due to take place in the 5,000-capacity Malawati Stadium, with the tournament being held from February 28 to March 6.

A clash between holders China and European champions Austria is the stand-out tie in the men’s competition, with the two teams joined by Chinese Taipei, Greece, North Korea and the Czech Republic in Group A.

Germany, led by Dimitrij Ovtcharov, have been touted as the second favourites for the title and will hope to ease through Group B which contains France, Denmark, Sweden, Malaysia and England.

"All teams are strong at the World Championships, but we could have gotten stronger teams in the group stage,” said Ovtcharov, who was the dominant force in European competition in 2015.

"We have to be perfectly prepared of course, and all of us have to work hard until the Championships to get in better shape."