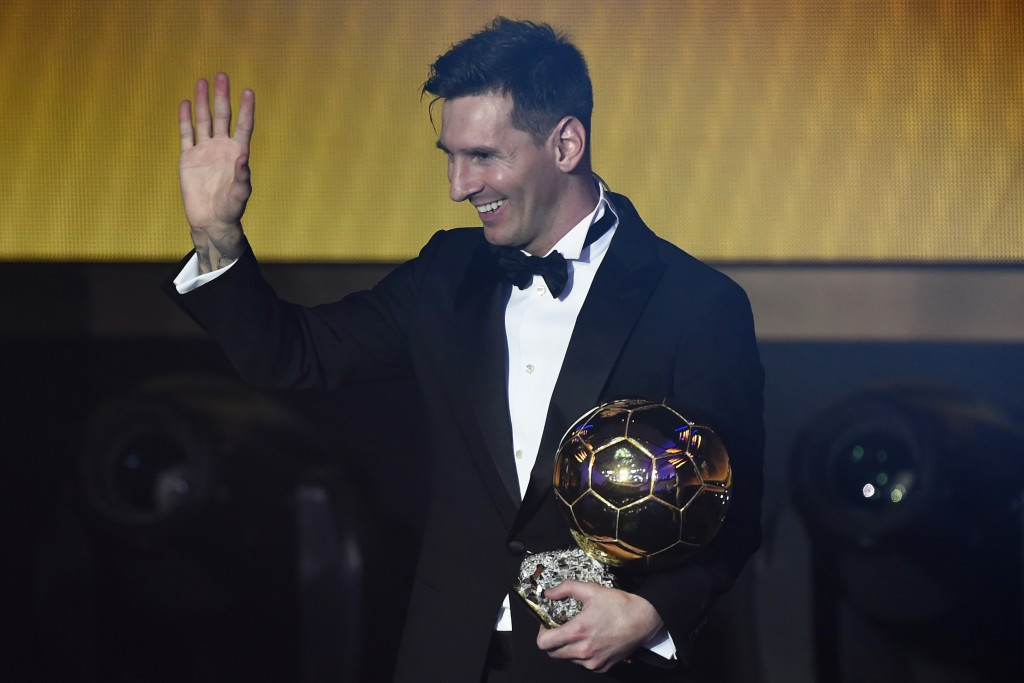 Barcelona star Lionel Messi has been named as the winner of the FIFA Ballon d’Or for a record fifth time at a glittering ceremony in Zurich, beating off competition from Real Madrid forward Cristiano Ronaldo and Brazilian team-mate Neymar.

The Argentinian enjoyed a superb 2015, during which Barcelona secured the treble by winning La Liga, the UEFA Champions League and the Copa Del Rey, Spain’s premier domestic cup competition.

On a personal level, Messi was the standout individual former, netting 61 goals in 52 games.

Portugal’s Ronaldo was  second with 27.76 per cent.

Neymar was third after receiving 7.86 per cent, with the winner chosen by the coaches and captains of the national teams as well as by international media representatives invited by FIFA and France Football.

“It is incredible it is my fifth, more than I dreamed of as a kid.

“I would like to thank all who voted for me, my team-mates and football in general for everything it has brought me, bad and good, it has made me grow and learn always.”

United States striker Carli Lloyd, who scored a hat-trick in her side’s 5-2 victory over Japan in the Women’s FIFA World Cup final, was given the Women’s World Player of the Year Award for the first time in her career ahead of Germany’s Celia Sasic and Aya Miyama of Japan.

Lloyd’s hat-trick helped the US claim a record third World Cup title and included a superb strike from just in front of the half-way line.

Sasic, meanwhile, was nominated for the prize despite opting to retire midway through the year at the age of 27.

The success continued for the US as their women’s coach Jill Ellis pipped Japanese manager Norio Sasaki to the Women’s Coach of the Year Award.

England’s Mark Sampson, whose side beat Germany in the World Cup third-place play-off, was third.

“It has been a dream ever since I started with the national team,” Lloyd said.

“Keep your dreams and just go after them.”

Barcelona manager Luis Enrique, who guided the team to the treble in 2015, was named Men’s Coach of the Year, with Bayern Munich manager Pep Guardiola second and Jorge Sampaoli, who helped Chile to the Copa América title, third.

Though Messi scooped the main prize of the night, he missed out on the FIFA Puskás Award for the goal of the year.

Brazilian Wendell Lira’s superb spinning bicycle kick, scored in his Goianésia side’s victory over Atlético Clube Goianiense in the Brazilian First Division in March, was chosen ahead of Messi's solo effort against Athletic Bilbao in May’s Copa Del Rey lost out to