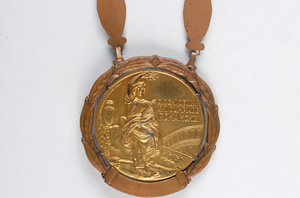 A boxing gold medal won by American light middleweight Wilbert McClure at the Rome 1960 Games will be among items up for sale at an "Olympic Records and Rivals" online auction due to begin on Thursday (January 14).

The medal, set in its original cast bronze olive leaf chain, features Nike, the Greek Goddess of Victory, with the Colosseum in the background and the name of the sport inscribed in Italian.

It is still in its original presentation box and comes with a photo of McClure alongside his fellow American 1960 Olympic boxing champions, Eddie Crook and Cassius Clay, signed and inscribed in gold ink by McClure.

Although markedly less successful than that of Clay, who later changed his name to Muhammad Ali, perhaps the most famous in the history of boxing, McClure did enjoy a nine-year professional career after the Games before becoming a Massachusetts State boxing commissioner.

Medals awarded at the 1960 Games were the first designed to be worn around the neck and the first for any Summer Games to feature the name of the specific sport.

The sale of Olympic memorabilia is being facitated by RR Auction, with bidding due to remain open until January 21.

Other items up for sale include a Calgary 1988 Winter Olympic Torch, one of around 100 manufactured for a Relay which took an 88-day journey across 18,000 kilometres of Canada.

Arguably the rarest item up for sale, however, is a Chamonix 1924 Winter Olympics gold medal, one of just 33 handed out during the first edition of the Winter Games.

The medal comes with an official red leather presentation box, although it has not been revealed who the medal was initially awarded to.

More information on items up for sale is available here.