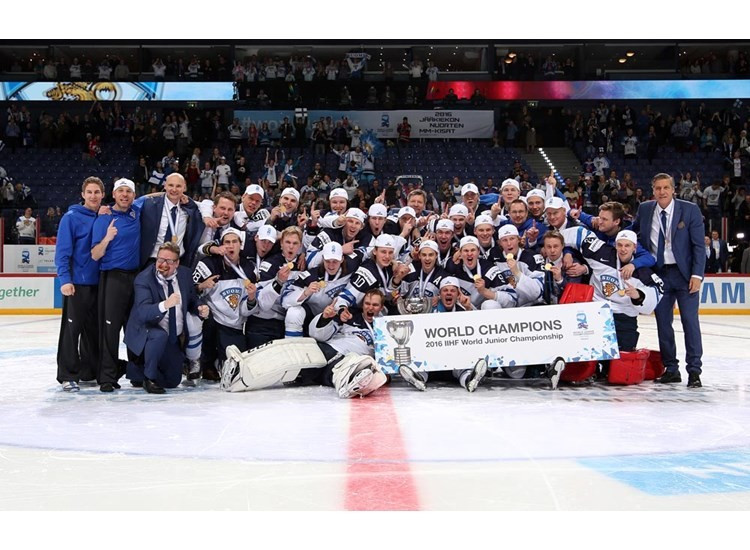 Kasperi Kapanen scored an overtime winner to earn hosts Finland a 4-3 victory over Russia in the final of the International Ice Hockey Federation (IIHF) World Junior Championship in Helsinki.

The Finns were on the brink of securing the win in normal time but a last-gasp equaliser from Andrei Svetlakov took the game to overtime in which Kapanen fired home the decisive goal after one minute and 33 seconds.

After being picked out by Aleksi Saarela in the Russian zone, Kapanen eluded defenceman Sergei Boikov and circled the net to score on a wrap-around as goalie Alexander Georgiev reached haplessly with his stick.

Goals from Sebastian Aho and then Mikko Rantanen turned the game in Finland’s favour with just over two minutes of normal time remaining and although the home nation were unable to hold onto that lead, it didn’t matter in the end.

Finland have now won two out of the last three tournaments having also triumphed in 2014, adding to their two other successes in 1987 and 1998.

"We just tried to enjoy the game as a once-in-a-lifetime opportunity - a final in a World Championship in our home city," said Aho.

Earlier in the bronze medal match, the United States inflicted an 8-3 defeat on Sweden with Anders Bjork, Ryan Donato and Matthew Tkachuk all scoring braces for the Americans.

Brock Boeser and Brandon Carlo also chipped in with one goal apiece as Sweden, fourth-place finishers last year, suffered their biggest-ever loss in a medal game.

"We played a good game today and overall a strong tournament so it's definitely something to be proud of," Bjork said.

US goalkeeper Alex Nedeljkovic, who made 35 saves, added: "I think we had a pretty good tournament.

"We came here to win gold, but unfortunately that didn’t happen.

"Bronze, I guess, is the third best thing.

Having gone 2-0 behind, William Lagesson and Carl Grundstrom both got their names on the scoresheet to bring Sweden back onto level terms going into the second period.

But the US then found their way past Sweden goalkeeper Felix Sandstrom on six occasions before Axel Holmstrom grabbed a late consolation for the Scandinavians.

"I don't know what happened.

"I just think the whole team gave up."

The next edition of the IIHF World Junior Championship is scheduled to take place in the Canadian cities of Toronto and Montreal, starting on December 26, 2016 and ending on January 5, 2017.