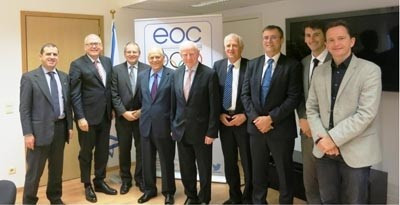 Director of the European Olympic Committees European Union (EOC EU), Folker Hellmund, presented their key activities during 2015 at their 12th Executive Board meeting in Brussels.

Hellmund detailed how the EOC EU Office, who act as the representation of the EOC to the European institutions, had begun implementing the Supporting the Implementation of Good Governance in Sport (SIGGS) project during 2015.

The project aims to build on the success of the achievements of the Sport 4 Good Governance, which ran between 2012 and 2013, by providing practical guidance to National Olympic Committees (NOCs) and national sport federations on how to implement principles of good governance.

Selected by the European Commission for European Union (EU) co-funding under the Erasmus+ Sports Programme in December 2014, the project uses educational tools and training to meet the needs of the respective sport organisations.

With implementation having started in January 2015, the EOC EU Office will continue to work throughout this forthcoming year to complete the project aims.

Their staging of the fourth edition of the European Evening of Sports in May, which brought together over 300 participants together to discuss the role sport of sport in society, was also determined as a success.

Hellmund discussed their office’s work in lobbying in the fields of Erasmus+ Sports, Data Protection and Visa Policy to the EU, while he also determined their communications activities throughout the year.

The meeting, which was also attended by the Czech Olympic Committee’s Roman Kumpost and EOC Executive Committee member Niels Nygaard, saw discussions held regarding the framework of the EU’s single digital market, which was determined as a key challenge for 2016.

Jean-Michel Saive was appointed by the Board as a professional representative of the Olympic Athletes’ Commissions, dealing with EU Affairs in Brussels, while the office’s budget and work plan was approved for the forthcoming year.