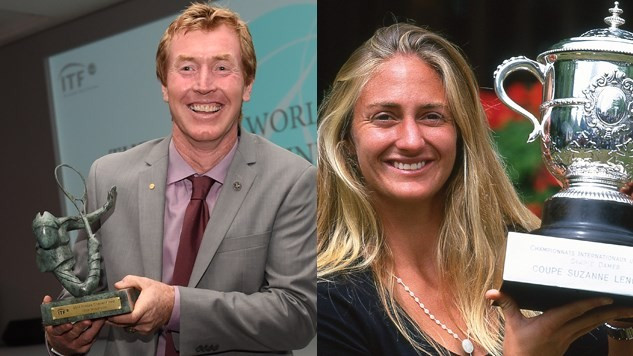 France's two-time Grand Slam singles champion Mary Pierce and Australia's Olympic doubles gold medallist Mark Woodforde have been appointed to the International Tennis Federation (ITF) Board of Directors, it has been announced.

Pierce, winner of the Australian Open in 1995 and the French Open five years later, and Woodforde, who claimed 12 Grand Slam doubles titles during his career, will join the other 13 members on the Board along with ITF President David Haggerty.

Their appointments are subject to confirmation by the ITF Annual General Meeting in Zagreb next June and both will serve four-year terms.

They will also lead the ITF’s Athlete Commission and be members of the ITF’s Olympic Committee.

At the recent ITF General Meeting in Santiago in Chile, where Haggerty was elected to lead world tennis’ governing body, it was agreed that two former players, one man and one woman, would be chosen to serve on the Board.

The move comes in order to give the ITF a better understanding of players needs in the game and the change is now a mandatory part of the organisation’s constitution.

“They are the first athlete members of the ITF Board and will provide good insight into the needs of the players and help us to grow the game of tennis around the world,” Haggerty said.

“Their perspective and collaboration is very important to the ITF as we work to keep tennis strong and vibrant.”

Pierce also made it to the final of the 2005 US Open and reached a career-high of number three in the world in January 1995 shortly after claiming victory at the Australian Open.

“I am very proud and honoured to join the ITF Board,” said the 40-year-old Canadian-born Pierce.

“I am convinced that their role in the tennis world is crucial, and I will do my best to bring as much as I can to their action.”

Woodforde clinched doubles gold at the Atlanta 1996 Olympic Games alongside Todd Woodbridge before the pair earned silver at Sydney 2000.

“It’s exciting to be appointed to the ITF Board of Directors,” the 50-year-old said.

“Some of the proudest accomplishments of my career came when I played for my country in Davis Cup and the Olympic Games and was able to see at first hand the work of the ITF.

“My life continues to be centred around tennis as a commentator and coach.

“I think that this gives me both insight and perspective on the views of the players that I can share with the Board as we work together to grow tennis around the world.”