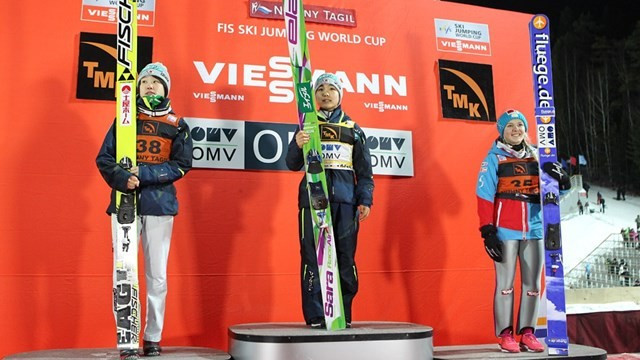 The 19-year-old was forced to settle for second place to 2015 World Cup winner Daniela Iraschko-Stolz of Austria yesterday, but put herself in pole position to return to the top of the podium after jumping 98 metres with her first effort.

Her nearest challenger Eva Pinkelnig managed 94.5m, giving Takanashi a solid lead heading into the second attempts of the day and she ensured victory by producing the furthest jump of the competition, landing at 99m.

Takanashi's two excellent jumps saw her end as the clear winner on 257.1 points, with her team-mate Yuki Ito moving up to second place, following efforts of 92m and 91.5m and an overall total of 233.1 points.

“I had to do some technical corrections, compared to yesterday,” said Takanashi, the 2013 and 2014 overall World Cup champion.

Despite her excellent opening jump, Austria's Pinkelnig missed out on back-to-back podium finishes after her lowly second round effort of 85m saw her drop from second to 14th position.

Her team-mate Chiara Hölzl claimed the final podium spot with efforts of 90m and 95m giving her a total of 232.4 points.

Following her victory, Takanashi moved onto 280 points in the overall standings, with yesterday’s winner Iraschko-Stolz and Ito lying on 179 and 151 points respectively.

Meanwhile, Slovenia's Peter Prevc regained the lead in the overall men's standings after claiming his first victory of the season by ending on 267.4 points thanks to jumps of 131.5m and 139.5m.

Austria’s Michael Hayboeck finished as the runner-up having ended on a total of 260.4 points, while Norway’s Johann Andre Forfang completed the podium positions on 253.8.

Yesterday’s winner Severin Freund finished well down the field in 12th place on 225.4 points, with the result seeing the German drop behind Prevc in the overall standings.

The Slovenian now lies on 364 points, while Freund and Norway’s Kenneth Gangnes have 327 and 265 respectively.