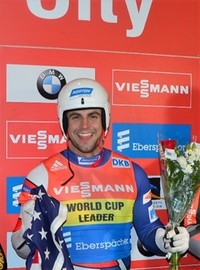 Chris Mazdzer ensured home success continued at the Luge World Cup in Park City as the American stormed to victory on the Utah track.

Having seen his compatriot Summer Britcher earn her maiden World Cup win in the women’s event yesterday, Mazdzer produced a superb first run of 45.479 sec to the lead the field at the halfway mark of the event.

The 27-year-old, who also won gold last week in Lake Placid, continued to be the fastest slider on the course after producing a second run time of 45.481 sec to end with an overall total of 1min 30.960 sec.

Austria’s Wolfgang Kindl proved to be the American's nearest challenger, with the World Championships bronze medallist ending 0.096 behind the home favourite, having posted the second fastest times on both runs.

“This is so exciting,” said Mazdzer after sealing his win on the Salt Lake City 2002 Olympic track.

“Two wins in a row and in front of my home crowd.

“The pressure was enormous and the first corner was so difficult for everyone.”

Frustration, though, continued to mount for the reigning Olympic champion Felix Loch after he failed to win for the fourth consecutive World Cup, having dominated the event throughout the duration of 2014/15 season.

The 26-year-old had been forced to settle for second at last season’s concluding World Cup event in Sochi and has begun the new campaign with a disqualification in Innsbruck and a sixth place at Lake Placid.

However, there are signs the four-time world champion is regaining his form after finishing third in Park City with a time of 1:31.087, with his team-mate Ralf Palik narrowly missing out on the podium after clocking 1:31.410.

Mazdzer’s victory saw him take the lead in the overall World Cup standings having moved to 192 points, with Russia’s Semen Pavlichenko dropping to second place on 181.

The World Cup season will continue next weekend in Calgary, Canada.