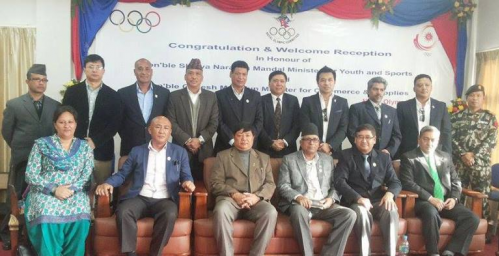 The Nepal Olympic Committee (NOC) has held a welcome event in honour of the newly appointed Youth and Sports Minister, Shatya Narayan Mandal, and Ganesh Man Pun, the Minster of Youth and Supplies.

NOC President Jeevan Ram Shrestha, who was elected to the post in September, greeted the Government Ministers and spoke to them regarding key issues affecting both the NOC and sport throughout the country.

Shrestha briefed the pair on the Olympic Movement, its norms and values, as well as the concept of autonomous national sports federations.

In response, Mandal confirmed it was a key priority of the Youth and Sports department to make sport autonomous, reflecting that all sport in Nepal should be non-political.

He also stated that sports rules and regulations should be redefined to ensure they remain in accordance with the International Olympic Committee (IOC) Charter.

The event was also attended by several members of the NOC Executive Board, including the organisation’s general secretary Lama Tendi Sherpa, and members of various national federations.

At the close of the meeting Mandal presented certificates and cash prizes to the winners of the International Day of Sports for Development and Peace painting workshop.

Organised by the Peace and Sports Commission of Nepal Olympic Committee, the programme was conducted by NOC Executive Board member Nilendra Raj Shrestha on April 6, in order to promote peace.