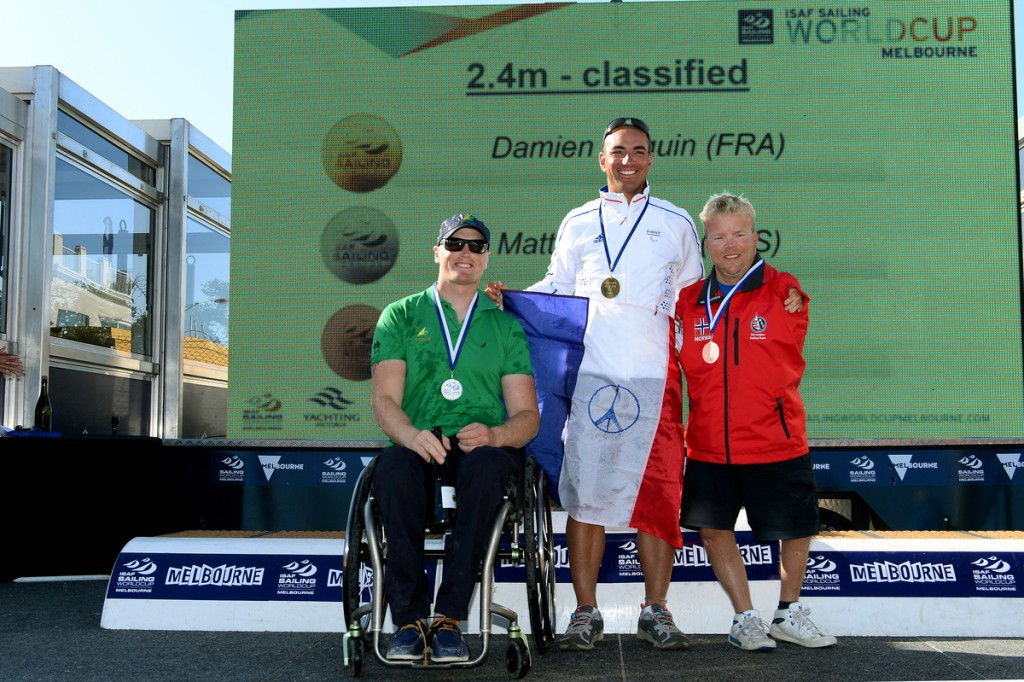 Newly crowned world champion Damien Seguin’s success in the 2.4 metre class continued after the Frenchman claimed the overall victory at the Sailing World Cup in Melbourne.

Heading into the final day of racing in the Paralympic events, Seguin was tied for first position with Britain’s Megan Pascoe and Australia’s Matt Bugg, with the latter hoping to gain revenge after finishing as the runner-up at last week’s Para World Sailing Championships.

Bugg put himself in pole position to claim the overall victory after winning the first race of the day, with Seguin second and Pascoe’s challenge fading after finishing fifth.

However, the Australian would be forced to settle for silver for the second consecutive week as he came home fifth in the concluding race, with Seguin earning another second place to elevate himself to the top of the standings.

"We had a great battle," Seguin said afterwards.

"With the worlds and this event I have won my qualification to represent France at the Paralympics.”

SKUD18 sailors Dan Fitzgibbon and Liesl Tesch were also able to back up their World Championship success by earning the first World Cup title of the new season as two second place finishes saw the home favourites end four points clear of their British rivals Alexandra Rickham and Niki Birrell.

Another Australian triumph came in the sonar class as Colin Harrison, Jonathan Harris and Russell Boaden held onto their advantage over the French crew of Bruno Jourdren, Eric Flageul and Nicolas Vimont-Vicary to end the regatta seven points clear.

With several of the races cancelled due to strong winds yesterday, there was a bumper penultimate day of action in the Olympic classes, as all but the women’s RS:X event had an additional race added to their programme.

Australia’s Alexander and Patrick Conway are assured of the men’s 470 victory having won all eight races of the regatta to boast an unassailable 11-point advantage over their nearest challengers in the five-boat fleet.

Their compatriots Carrie Smith and Jaime Ryan also cannot be passed in the women’s 470 event as they lie six points clear of fellow Australians Sasha Ryan and Aurora Paterson.

Singapore’s Colin Cheng suffered a difficult start in the men’s laser event by recording an 18th place finish, but with the score currently discarded the race leader recovered by winning the final two races of the day.

It gives the London 2012 Olympian a commanding 13-point lead over his nearest rival, Michael Kennedy of Australia, heading into tomorrow’s medal race.

One of the more intriguing battles of the week has been between Josip Olujic and Australia’s Oli Tweddell in the finn class, but the home nation look set for disappointment as the Croatian sailor currently holds a two-point advantage.

New Zealand’s Logan Dunning-Beck and Jack Simpson currently lead the men’s 49er event by six points from the Australian crew of Will and Sam Phillips, while their fellow Kiwis Erica Dawson and Ellie Copeland won today’s final race to lead home favourites Tess Lloyd and Caitlin Elks by a point in the women’s 49erFX.

Australia’s Ashley Stoddart and Joanna Sterling look set to claim victories in the laser radial and RS:X classes respectively having established leads over their rivals, while German Florian Gruber’s near unblemished record in the kiteboarding competition has assured him of victory in the non-Olympic class.