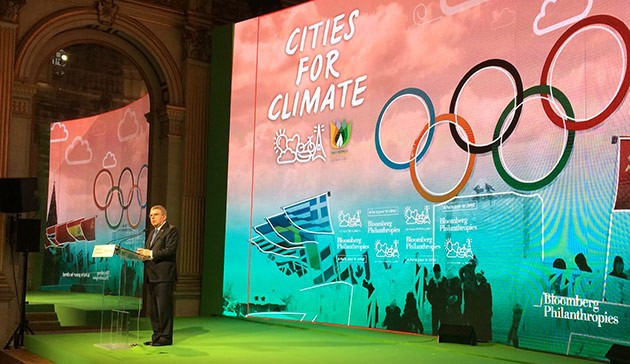 The host city for the 2024 Olympic and Paralympic Games will have to implement a carbon management and reduction plan for the event, International Olympic Committee (IOC) President Thomas Bach told the United Nations Climate Change Conference in Paris.

Before speaking in front of the attendees at the summit, Bach met with French President François Hollande, Paris Mayor Anne Hidalgo and Eric Garcetti, Mayor of Los Angeles.

Paris and Los Angeles are two of the four cities in the running to stage the 2024 Olympics and Paralympics along with Budapest and Rome after Hamburg's citizens rejected the opportunity to bid for the event in a referendum on Sunday (November 29).

During the conference in the French capital, Bach claimed Agenda 2020, the strategic roadmap for the future of the Olympic Movement, will help bid cities ensure hosting the Games provides a sustainable legacy for their respective regions.

“The Olympic Games London 2012 saved an equivalent of 400,000 tonnes of carbon dioxide, mainly in construction and operational activities,” Bach said.

“Sustainability standards used by London have quickly become the international norm for global events and are used by future host cities like Rio de Janeiro and Tokyo.”

Paris 2024 co-President and three-times Olympic champion Tony Estanguet used the conference as an opportunity to demonstrate the importance of sustainable development in the city’s bid for the 2024 event, claiming the issue is “the very DNA of our candidacy”.

Existing sporting venues, such as Roland Garros and the Stade de France, form a key part of their attempt at bringing the Summer Games to the country for the first time since 1924.

Alongside Bach, Estanguet took part in a Summit of Cities for the Climate discussion yesterday, attended by Mayors from all over the world.

“The scale of the climate change summit illustrates the pressing challenges the world is facing on this matter and sport must play its part,” he said.

“Paris 2024 is designing a Games plan to fit in with the long-term aspirations of our city and country and this means we are committed to ensuring that sustainable practices are at the heart of the bid.

“Sustainable development is not a goal, it is the very DNA of our candidacy.

“Our environmentally friendly approach will drive down costs by incorporating many existing venues including iconic settings such as the Stade de France, Roland Garros and the Grand Palais.

“The Seine is also undergoing a large-scale clean-up programme and our ambition is to host Triathlon in the river that runs through the heart of the city in the shadow of the Eiffel Tower.

“Our recently announced vision for the Paris 2024 Olympic Village includes a plan to create a new ‘Eco City’ with 3,500 innovative and environmentally-sensitive homes for local people once the Games have finished.

“The location of the Village also means that during the Games 84% of athletes will be within 25 minutes of their competition venue resulting in minimal travel time and reduced emissions.”

The conference, which began last Monday (November 30) and is due to last until December 11, is thought to be one of the largest of its type ever organised, with 45,000 delegates scheduled to attend.