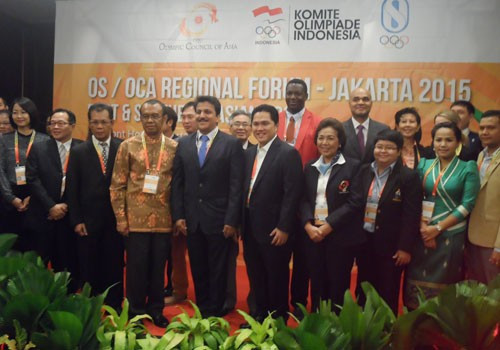 Indonesian Olympic Committee (KOI) President Erick Thohir has claimed the 2018 Asian Games is “very important” to the country as they prepare to stage the quadrennial event for the second time in their history.

Thohir, who succeeded Rita Subowo as the head of the National Olympic Committee (NOC) last month, was speaking at the Olympic Solidarity and Olympic Council of Asia (OCA) Regional Forum, held in Indonesia’s capital Jakarta.

The city will host the Games in 2018 and Thohir expressed his confidence that the country will deliver be able to deliver a successful edition of the event, explaining to the 19 National Olympic Committees (NOCs) present that Jakarta is an entertainment and food city.

He also reflected that the busy traffic in the capital was evidence the country’s growing economy, which he believes will boost preparations for the Games.

“We believe we are one of the big countries in Asia, but we need to wake up,” he said.

“This is why the Asian Games in Indonesia in 2018 is very important, we are looking forward to the discussions.

“Indonesia is working hard to make sure the Asian Games is a successful event, it is good for Asia to become one and that we learn and share some experiences.

“I look forward to working for four years together.”

The 2018 Games, set to take place from August 18 to September 2, are due to be held in Jakarta for the second time with the city having hosted the fourth edition in 1962.

On this occasion,  Palembang, the capital city of South Sumatra, is also due to host some events.

Thohir, President of Italian football giants Inter Milan, also revealed plans for the NOC to send a team to the Asian Winter Games for the first time in their history, with the event scheduled to take place in the Japanese city Sapporo in February 2017.

Prior to the Forum, which Thohir was attending for the first time, he was introduced by his predecessor Subowo, who was present despite no longer being part of the NOC.

The 67-year-old, who ceased to be an International Committee (IOC) member after serving her final term as KOI President, reflected that the NOC’s of China, Thailand, Singapore, Malaysia and the Philippines could help to advise Indonesia on their preparations for the Asian Games, due to their experience of organising multi-sport events.

The OCA’s Haider Farman and Olivier Niamkey from IOC’s Olympic Solidarity were other keynote speakers at the start of the Forum.