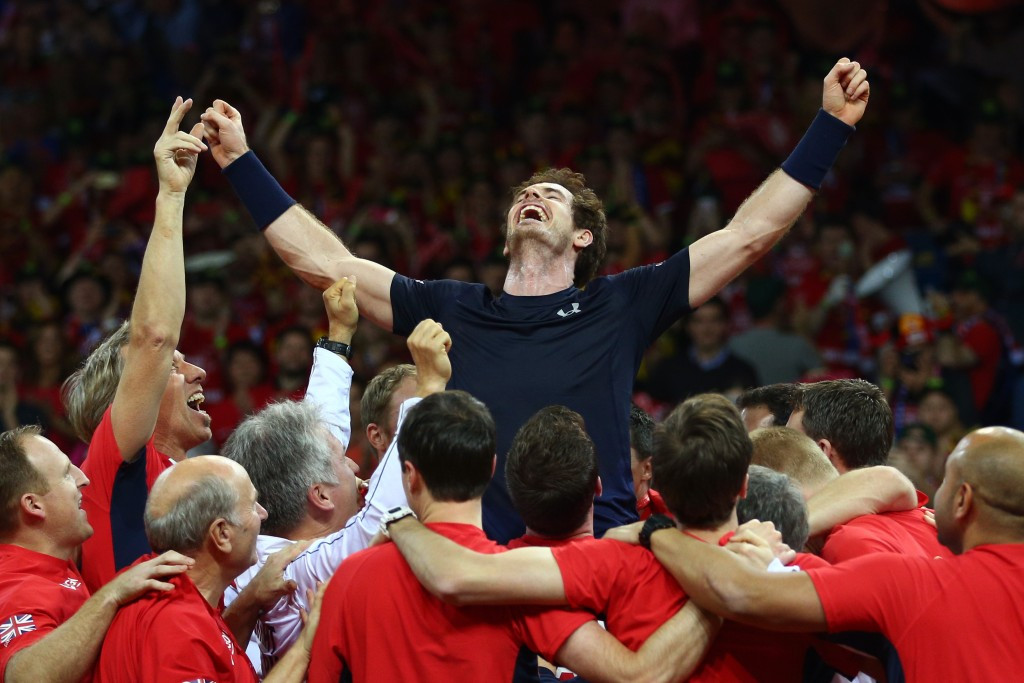 An Andy Murray masterclass powered Britain to their first Davis Cup victory since 1936 and 10th overall title today after taking an unassailable 3-1 lead against Belgium in Ghent.

The world number two was locked in a high-quality clay court duel with Belgium's number one David Goffin, but always had too much for his opponent in taking a 6-3, 7-5, 6-3 victory.

After a fiercely fought start, Murray saved a break point at 2-2 in the first set before producing a stunning forehand pass and two brilliant returns to break and take a decisive 5-2 lead.

Goffin fought hard in the second set, but Murray's relentness rallying forced the breakthrough in the 11th game when a Goffin forehand hit the net on break point.

The Briton served the set-out from 0-30 down before hitting back twice after suffering an early break in the third.

He finished the job in superb fashion with a spectacular lob winner to end a lengthy groundstroke rally before collapsing to the floor and being swamped by jubilant team-mates.

Roared on by hundreds of raucous travelling fans, Murray added to his opening day singles victory over Ruben Bemelmans and his doubles triumph with brother Jamie over Goffin and Steve Darcis.

"It's been an incredible few years," the 28-year-old said.

"I can't believe we did it, I never thought we would.

"I play my best tennis when I play for my country.

"The atmosphere was phenomenal."

The victory puts Murray level with his arch-rivals Roger Federer, Rafael Nadal and Novak Djokovic, all of whom have won Davis Cup titles with Switzerland, Spain and Serbia respectively.

It also adds further gloss to a career topped by Grand Slam singles titles at the 2012 US Open and 2013 Wimbledon, as well as a home triumph at the London 2012 Olympic Games.

His brother Jamie partnered his younger sibling to three doubles victories this year, while the only other squad member to add a live point was James Ward, who won a shock and crucial victory over United States' number one John Isner during the quarter-final.

Other players have made their mark, however, including Kyle Edmund, who battled valiantly before losing from two sets up against Goffin in the opening match of the final.