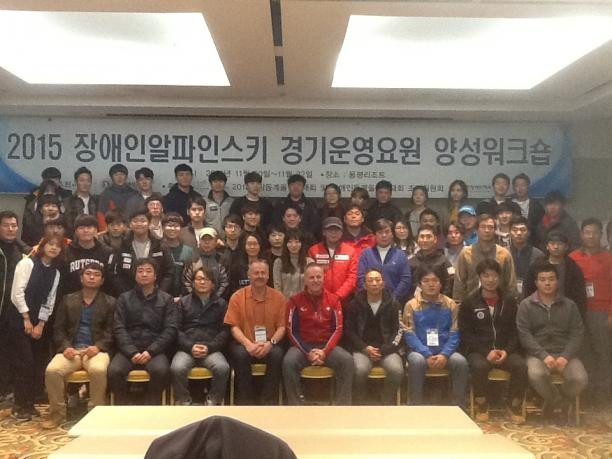 Training for more than 50 alpine skiing officials has taken place in Pyeongchang ahead of the Winter Paralympics in 2018.

The South Korean Alpine Skiing Association (KASA), supported by the Pyeongchang 2018 Organising Committee, put the National Technical Officials (NTOs) through their paces between November 20 and 22.

Brad Serwa, the Technical Delegate for alpine skiing at PyeongChang 2018, led the course alongside Markus Walser, the chairperson of the Sport Technical Committee (STC).

Participants took part in sessions on the theory of officiating at Para-alpine skiing competitions, using the IPC Alpine Skiing rules and regulations.

The next training days will take place in January and will be practical on-snow sessions, with 240 NTOs set to take part.

In addition, 40 snowboard NTOs will be trained in theory and on-snow by the STC’s Head of Competition Davide Cerato and Martijn Oostdijk, the 2015-16 Race Director.

The training followed the second official visit by representatives from International Paralympic Committee (IPC) Alpine Skiing and Snowboard to the Jeongseon and Yongpyong Alpine Centres last month, which will be the speed and technical venues respectively for the 2018 Winter Paralympics.

Snowboard will also be contested at Yongpyong, where IPC Asia Cup events in snowboarding and alpine skiing are due to take place between March 6 and 10.

Dimitrije Lazarovski, Head of IPC Snow Sports, said: "The organisers [KASA] of both the alpine skiing and snowboard Asia Cups have made good progress in their preparations for hosting these important first competitions, as well as in the longer term for PyeongChang 2018.

“Supported by the Games organisers, these will act as pre-test Events for the Paralympic Winter Games, so it will be a great opportunity for athletes and teams to get a feel for the venues during competition.”