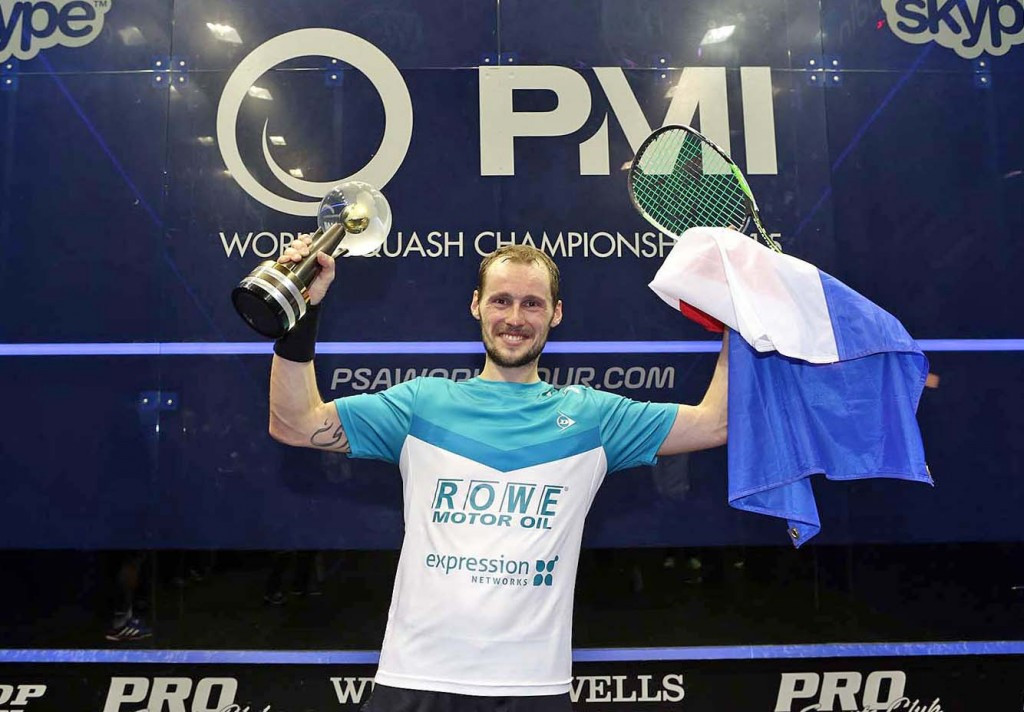 Frenchman Gregory Gaultier finally got his hands on the Professional Squash Association (PSA) men’s World Championships title as he claimed a straight games victory over Egyptian Omar Mosaad in the final at the Maydenbauer Centre in Bellevue today.

Gaultier, a four-times runner-up, produced a controlled display to ensure he was crowned world champion for the first time in his career with a 11-6, 11-7, 12-10 success in 58 minutes.

The 32-year-old, who squandered five match balls during his 2006 final loss to Australia’s David Palmer in Cairo, dictated proceedings from the off and raced into a two-game lead to move within one of victory.

Mosaad, who ended compatriot Ramy Ashour’s title defence at the quarter-final stage, came back strongly in the third as he attempted to wrestle himself back into contention.

He looked as though he may halve the deficit but a superbly-executed drop shot at the perfect time from Gaultier squared a thrilling game at 10-10, and the Frenchman then went on to win the next two points to wrap up a commanding win.

The result will also send Gaultier, seeded third for the tournament, to the top of the PSA world rankings when the latest standings are released at the beginning of next month.

“It’s unbelievable, there’s no words that can describe this feeling,” Gaultier said.

“Since I was a kid it was always my dream to win this tournament."

Gaultier added: “I remember my first experience at 23-years-old in front of the pyramids in Egypt.

“I had five match balls and I remember at that point I started to feel like a kind of asthma - my head was shaky and frozen.

“I couldn’t finish off the match but you always learn from losses and it was an experience.

“I lost four times and I kept wondering if it was ever going to happen.

“I just kept on believing in myself, kept on working hard and I was always disciplined.”

Gaultier said after his semi-final win over Englishman James Willstrop that he would dedicate his victory should he take the title to those who lost their lives in the terrorist attacks in Paris last Friday (November 13) and admitted it had been an emotional occasion.

“Our hearts were broken with what happened in Paris - all the French people and all around the world,” he added.

“There should be no terror and today we put on a great fight, but it was a fight with respect on and off court.”