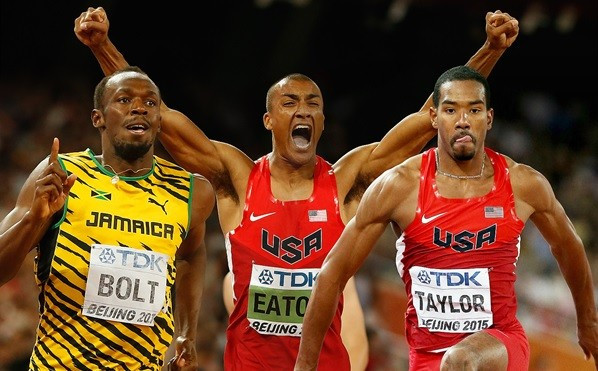 Jamaica’s Usain Bolt and American duo Ashton Eaton and Christian Taylor are the three finalists for the International Association of Athletics Federations (IAAF) Male Athlete of the Year award while Ethiopian Genzebe Dibaba, Dafne Schippers of The Netherlands and Poland’s Anita Wlodarczyk are in contention for the women’s prize, it has been announced.

Bolt, the six-times Olympic champion and five-times winner of the men's prize, cemented his status as the greatest sprinter on the planet by successfully defending his 100 metres, 200m and 4x100m titles at the World Championships in Beijing in August.

Eaton broke the decathlon world record with a score of 9045 points on his way to claiming his second successive world gold medal while compatriot Taylor won the triple jump crown in the Chinese capital with a leap of 18.21 metres, the second longest jump in history.

The women’s final three sees Schippers, the reigning 200m champion who also earned silver in Beijing in the 100m, go up against Dibaba, who has enjoyed a hugely successful year which included 1,500m gold at the World Championships.

She set a world record of 3min 50.07sec in the event at the IAAF Grand Prix in Monaco the previous month and posted the quickest 5,000m indoor time of 14:18.86 in 2015, earning bronze over the distance in China.

Hammer thrower Wlodarczyk was also in record-breaking form this year, throwing 81.08m in Cetniewo in August, the furthest in history.

The Pole reigned supreme in all 11 of her competitions in 2015, including in Beijing.

Owing to the ongoing doping scandals which has plunged the sport into crisis, IAAF President Sebastian Coe confirmed on November 6 that the World Athletics Awards Gala in Monte Carlo, where the winners of the awards were due to be announced, has been cancelled because of the “cloud that hangs over our association".

The Gala is organised by the International Athletics Foundation, a charity of which former IAAF President Lamine Diack, who was forced to resign his honorary membership of the International Olympic Committee following his arrest on allegations of accepting bribes to cover up doping charges, remains the President.

Despite cancelling the event, Coe, who chaired an emergency IAAF Council meeting on Friday (November 13) where Russia were hit with a ban from athletics, insists the winners of this year’s prizes will be “rightly honoured”.

The winners will be announced on social media to coincide with the IAAF Council meeting in Monaco from November 25 to 27.