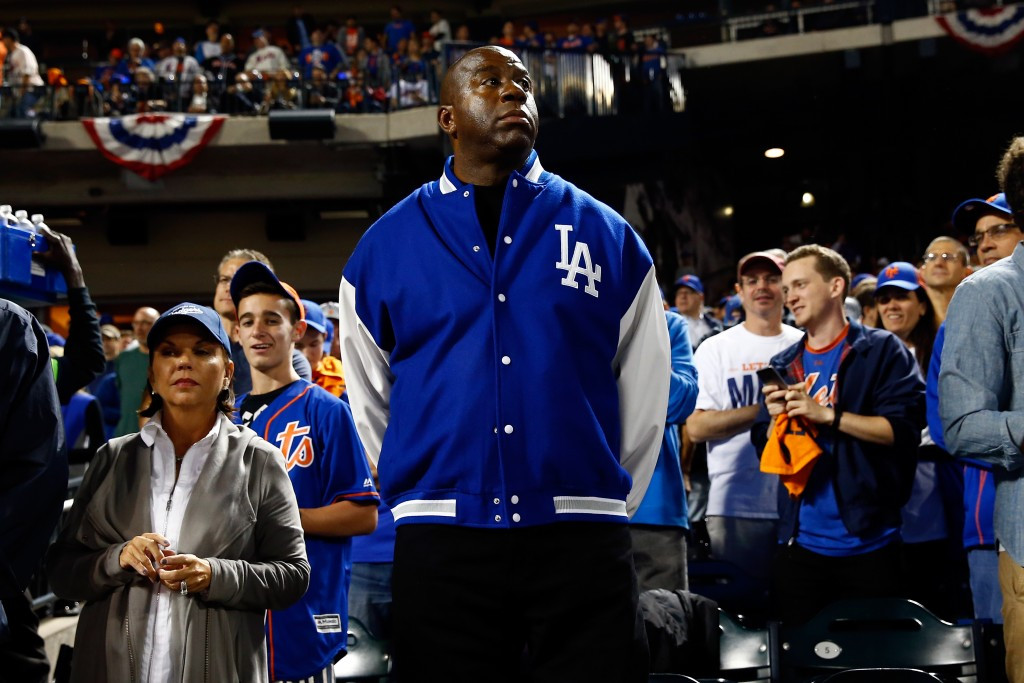 Johnson is one of the most well known figures in basketball having won the NBA title five times with the Los Angeles Lakers and the Olympic gold medal with the United States' so called "Dream Team" in Barcelona in 1992.

The hall-of-famer became an entrepreneur, philanthropist and motivational speaker after his retirement from the sport, and the 56-year-old is currently chairman and chief executive of Magic Johnson Enterprises, which provides services and products to ethnically diverse communities.

According to the company's website, he has become the most powerful African American man in business, while he has also dedicated his life to batting HIV after testing positive for the virus in 1991.

"The only thing greater than bringing a sports championship to Los Angeles would be bringing the Olympics back to the best sports town in America," he said.

"I was here for the 1984 Games, and I saw a city that was united and honoured to welcome the world.

"As a former Olympian, I’m proud to join the LA 2024 team and give them an assist in returning the 2024 Olympic and Paralympic Games to the United States.”

Durazo has been described as "one of the most savvy and successful labour and immigrant rights leaders in America".

She is currently the Vice-President for Immigration, Civil Rights and Diversity for UNITE-HERE union, which represents workers in textile industries, and she previously led the second largest central labour body in the country, the Los Angeles County Federation of Labour.

“I am excited to join LA 2024 and work towards an Olympics that would be a celebration of our city’s diversity, as well as a boost for our working families and our economy," said the 62-year-old.

"The support of our immigrant communities and our working families is vital to our bid’s success and I will work to make sure all hard-working Angelenos can participate in the Games if we’re fortunate to bring them to Los Angeles.”

LA 2024 chairman Casey Wasserman welcomed the appointments of both Johnson and Durazo.

"We couldn’t be prouder to welcome Earvin 'Magic' Johnson and María Elena Durazo to our LA 2024 team," he said.

"Together they bring a great diversity of talent and expertise, with each one addressing key aspects of the bid.

“Johnson is not only one of the greatest athletes of all time, he’s also one of our city’s most successful business leaders.

"A 1992 Olympic gold medallist, he’s a true champion on and off the court, and his work in our community has set a new standard for Olympic legacy and post athletic career-path for sports superstars.

"That is precisely what the Olympic family is looking for right now under the visionary Olympic Agenda 2020.

“But our bid would not be possible if we did not have the support of the hard-working people of Los Angeles, California and the United States.

"That is why it is so important to welcome María Elena Durazo as vice chair.

"Her years of experience leading the Los Angeles County Federation of Labour and now in her current role as Vice President at UNITE HERE will help LA 2024 build on the city’s strong public support for the Games by engaging our working families and immigrant communities.

"With Durazo’s support and guidance, we’ll ensure that the benefits of the Games will be realised all across our city, and that no community will be left behind.”

"Mayor [Eric] Garcetti and Casey Wasserman have done a very good job of tapping into both LA's Olympic heritage and its thriving modern sports scene, and we look forward to working with all of the leaders of LA 2024 to return the Olympic and Paralympic Games to the United States," he said.

Los Angeles are up against Budapest, Hamburg, Rome and Paris in the race to host the 2024 Games.

The International Olympic Committee is due to choose a host city at its Session in Lima in 2017.