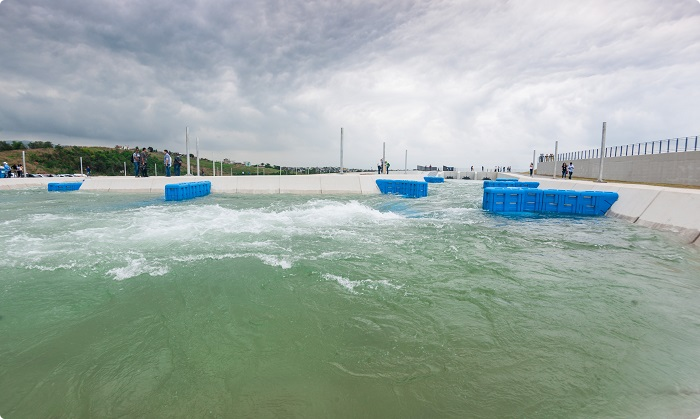 The Whitewater Stadium, which will play host to canoe slalom events at next year’s Olympic Games in Rio de Janeiro, has been officially unveiled by Mayor Eduardo Paes at a ceremony in the Brazilian city.

The venue, located on the Deodoro Olympic Park, will host a test event from November 26 to 29, when 250 athletes from 40 countries are expected to compete.

The City Government, have, however, claimed the Stadium is 85 per cent complete, with work still to be done on the surrounding features, although the course is fully finished.

Temporary seating, due to house just over 8,400 people, needs to be finished, while work also needs to be carried out on other infrastructure at the venue, which uses a series of pumps and man-made obstacles to produce a river.

"This sporting facility was perhaps the biggest challenge of the Olympic Games and today we can confirm that it has been delivered," Paes said.

"As everyone can see, this construction is the most complicated in Deodoro.

"It is with great happiness that today we see the course totally ready."

Paes also expressed at the event to mark the unveiling that he hopes the venue, which had undergone stringent model testing at Prague’s Czech Technical University, will be ready for use by the general public once the construction work has been finished and once the test event has been held.

The news marks a boost for organisers ahead of next year’s Olympic Games, with preparations around other water sport venues coming under fierce criticism due to concerns over pollution, with waste at the Guanabara Bay area, which will stage sailing competitions, proving a particular thorn in Rio 2016’s side.

Reports surfaced back in 2013 that Rio 2016 were even considering moving the canoe slalom events to a venue 700 miles away from Rio de Janeiro, near the famous Iguazu Falls, in order to cut costs.

At the time, fears over the state of progress were rife, prompting calls for alternative venues to be considered to allay any concerns.

The International Canoe Federation had expressed their satisfaction at the facility during a visit earlier this year.

The Whitewater Stadium forms part of the X-Park, which will also include BMX and mountain biking sports at the Games, and organisers hope it will help provide a legacy once the event has finished.