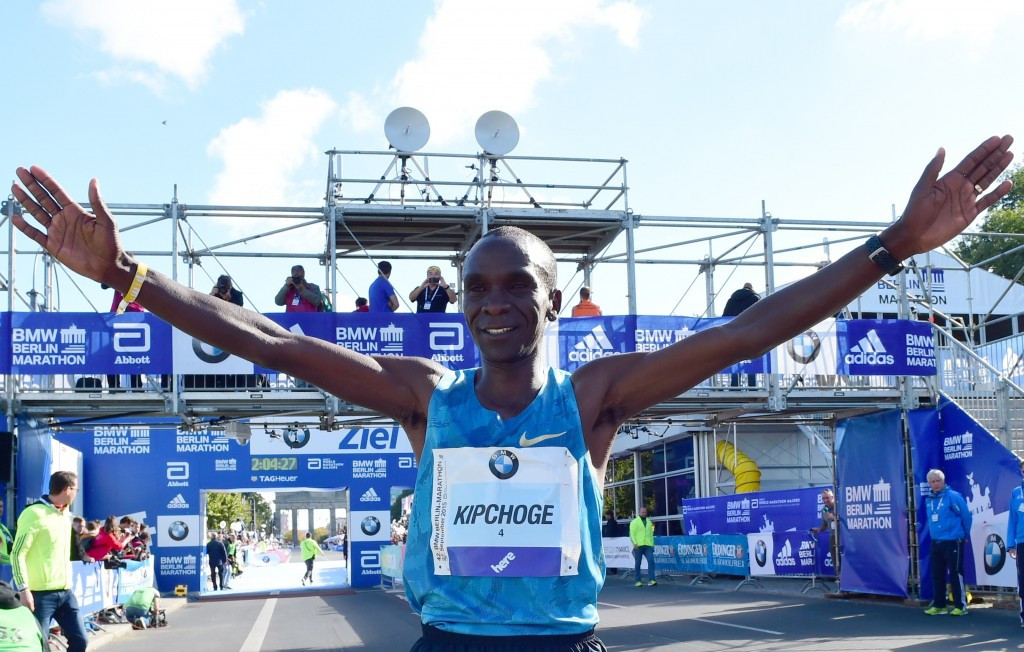 Eliud Kipchoge overcame footwear problems to produce a world leading time to win the men’s title at the Berlin Marathon, with Gladys Cherono taking the women’s title to secure a Kenyan double.

Kipchoge, who won the London Marathon in April, had targeted breaking the world record in Berlin and formed part of an early leading group of six which included his compatriots Emmanuel Mutai, Geoffrey Mutai and Eliud Kiptanui, as well as Ethiopians Feyisa Lelisa and Tamirat Tola.

The 30-year-old though appeared to be hindered by the insoles of his shoes having come loose and there was a danger he would fall out of contention entirely, but the Kenyan ignored the issue and remained on course to produce an excellent time.

Following the final pacemaker dropping out after 29 kilometres, Kipchoge opted to up the pace himself and only Mutai proved able to remain in touch initially but he fell away from the leader three kilometres later.

Having seen off his rivals Kipchoge was focused on breaking Dennis Kimetto’s world record of 2 hours 2min 57sec, set at last year’s marathon, however after a slower opening to the race he finished 1:03 down on his compatriot’s time as he eventually claimed victory in 2:04:00.

“It wasn’t a good day for me in these shoes, although they’re actually very good,” Kipchoge said afterwards.

“I tested them in Kenya but just had bad luck on the day, I had problems from the first kilometre.

“My goal was the world record but it wasn’t to be today, nevertheless I’m delighted with this win and a personal best.

“I would love to return to Berlin and improve my time.”

Kiptanui finished 1:22 behind his team-mate to finish second in a big lifetime best of 2:05:22 while Ethiopia’s Feyisa Lelisa completed the podium positions by finishing in 2:06:57.

Having won her first marathon in Dubai during January, Cherono produced a superb display in Germany’s capital city to see off the challenge of two-time winner Aberu Kebede of Ethiopia.

The pair had broken away from Ethiopia’s Meseret Hailu and Tadelech Bekele after 20 kilometres to turn the race into a head-to-head battle with the duo completing  the opening half in a time of 1:10:15.

Cherono though began to push on in the final 10 kilometres to move away from her rival and as a result of the increased tempo the Kenyan was able to become only the 18th woman to finish under the 2:20:00 mark as she finished in 2:19:25.

Kebede would eventually finish 1:23 behind her rival to secure second, while Hailu completed the top three by crossing the line in 2:24:33.