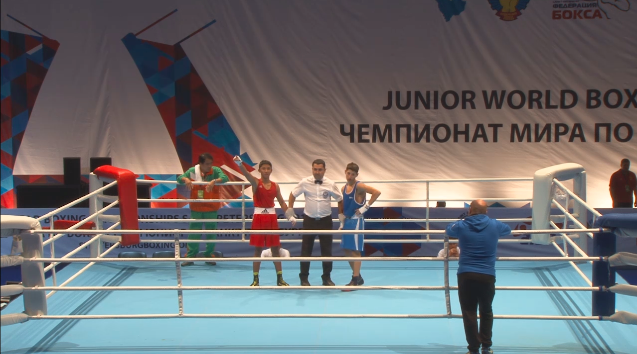 Romania enjoyed success on quarter-final day at the International Boxing Association (AIBA) Junior World Boxing Championships as both of their fighters booked semi-final places after recording impressive wins in the Russian city of St Petersburg.

Cosmin Girleanu was hopeful of progression in the under 46 kilogram pinweight division but the European Confederation Junior Boxing Championship silver medallist faced the tricky challenge of Ukraine’s Maksim Galinchev in his quarter-final bout.

The Romanian though would prove dominant from the start of the contest and several strong blows helped him towards a unanimous 29-28, 29-28, 30-27 points victory over his opponent, which guarantees the 16-year-old at least a bronze medal.

His compatriot Alberto Biro had the opportunity to add a second Romanian medal when he faced Indian boxer Sandeep Ghanghas in the under 75kg middleweight division, and he achieved a victory in style by being awarded a 29-28 victory on all the judges’ scorecards.

By contrast to the Romanian boxers, Cuba endured a mixed day in St Petersburg with Erislandy Alvarez falling to defeat in the under 52kg flyweight division to Kazakhstan’s Daulet Nvssan, who has moved a step closer to adding the world junior gold to his Asian junior title.

However, Edel Acosta secured a surprise win in the under 60kg lightweight event after fending off a strong start from top ranked European Bakhtiyar Gazibayov of Azerbaijan, to earn a points victory and secure his country’s third medal at the Championships.

Each of the 13 weight categories were contested on the sixth day of competition and the United States’ Marco Castro, who arrived as the favourite for the under 54kg bantamweight title, lived up to his billing by winning arguably the fight of the day against the Czech Republic’s Artur Sachbazjan.

The American controlled the contest throughout and his excellent footwork enabled him to avoid the best efforts of Sachbazjan as well as landing shots of his own, which helped him ease into the semi-final stage of the event.

Poland’s Eryk Apresyan was another boxer to produce a fine performance with a guaranteed medal on the line as he comprehensively beat Kyrgyzstan’s Aibek Akylbek Uulu in the 66kg welterweight division.

“I can fight much better than today, but my performance was enough to get a medal which was my target in the event,” Apresyan said afterwards.

“My opponent from Kyrgyzstan was taller than me, and had a longer reach, but I knew how I could beat him in the important bout.

“I hope I won’t be so nervous in the upcoming semi-final.”

The boxers will be able to enjoy a rest day tomorrow, with competition set to resume on Friday.

In all, 52 medallists were confirmed after the quarter finals.