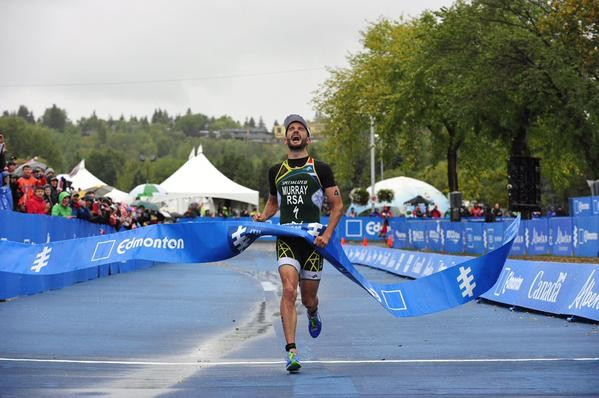 South Africa’s Richard Murray shook off the challenge of Spain’s Javier Gomez in the final lap of the five kilometres run to earn the second World Triathlon Series (WTS) win of his career, in Edmonton, Canada.

The 750 metres swim in tough and cold conditions saw no athlete able to break away from the field which meant a large lead pack headed out on the bike section together, including the pre-race favourites Gomez and Murray.

Gomez’s fellow Spaniard Mario Mola however found himself adrift of the leading group and was forced to work extremely hard in the chase in order to bridge the gap, which they achieved as the field prepared for the run.

With a large group heading into the final transition together, South Africa’s Murray and Wian Sullward hit the front with the aim of moving away early in the run to take gold in the Canadian city.

The pair were tracked by the leader of the WTS rankings, Gomez, who is bidding to become world champion for a record-breaking fifth time.

However Gomez was to be denied victory in Edmonton as Murray ran strongly during all three laps of the run to finally break the Spanish star’s resolve to move clear to the finish, which he crossed in 53min 19sec.

“Javi was hanging on the whole time and I really had to give it everything,” Murray said.

“I had some issues at the start of the day, I broke my swim cap, I had to give it everything in the end.

“My swim was much better than last year, and I managed to push hard on the bike.”

Despite being unable to take victory, Gomez moved a step closer to securing the overall Series title by finishing as the runner-up in 53:23, while Mola completed the top three 53:34.

In the absence of the women’s WTS leader Gwen Jorgensen of the United States, Britain’s Vicky Holland stormed to victory in the penultimate event of the series.

Holland ensured she was in a 15-woman lead group during the bike section of the race to the set herself up for an attack during the run, although Germany’s Anja Knapp and home favourite Dominika Jamnicky were the first to move away.

However the Briton was able to claw back her two rivals, who she then surpassed on route to claiming victory in 58:55.

The podium was completed by Bermuda's Pan American Games bronze medallist Flora Duffy, who earned her best ever WTS finish by finishing second in 59:04, while Australia’s Gillian Backhouse claimed bronze in 59:10.