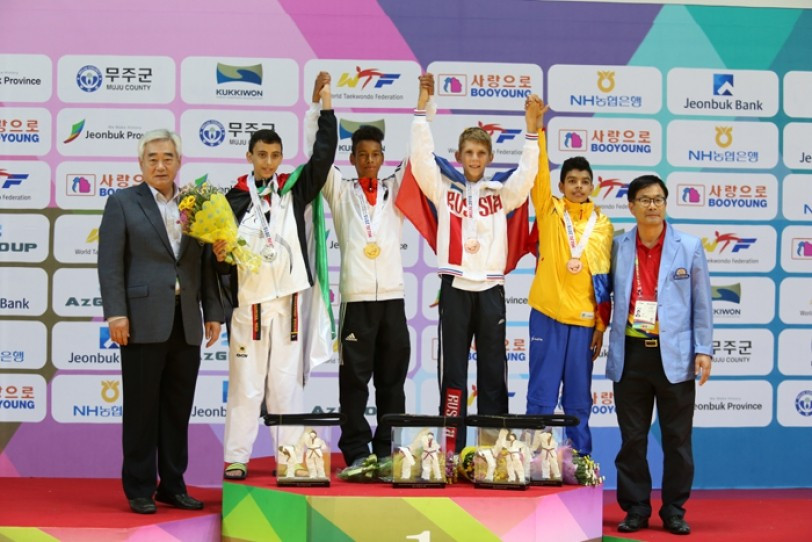 Palestine won their first-ever medal at a World Taekwondo Federation (WTF) promoted international competition as Mohammad Yasini took silver in the men’s under 41 kilograms division on the third day of the World Cadet Championships at the T1 Arena in Muju County, South Korea.

Yasini’s appearance in the final marked a historic achievement for the country given its National Federation was affiliated as far back as 1989, despite succumbing to a 16-13 defeat against Germany’s Ranye Drebes in the gold medal match,

"I am happy to win the silver medal, the first medal in taekwondo for our country," said Yasini.

"I want to be an Olympic medallist."

Denis Lantratov and Margarita Blizniakova topped the podium for Russia in the men’s under 45kg and women’s under 59kg categories respectively.

Lantratov beat Thailand's Suparwit Laowpolprateep 26-14 with a 12-point gap victory in the third round, before Blizniakova defeated Turkey's Huri Korkut, 10-2.

Iran's Hamed Asghari Mahiabadi and Germany's Spyros Raffael Kostaras had to settle for bronze medals in the men’s under 45kg, while Puerto Rico's Isabella Diaz and Iran's Negar Pourjamali came away with third-place honours in the women’s under 59kg.

Iran's Zohreh Hasan Nataj crushed Serbia's Nadica Bozanic 17-10 in the women’s under 55kg final, while the third step of the podium was shared by Turkey's Kezban Sefahat Bugan and Spain's Aitana Santome Santos.

Palestine competed without success in the women’s competition at the 2014 WTF World Cadet Championships, the inaugural edition of the annual event held in Baku.

Iran were the dominant force in the Azerbaijani capital, topping the men's and women's medal standings with an overall total of seven golds, four silvers and one bronze.

The action in Muju County is due to conclude tomorrow.