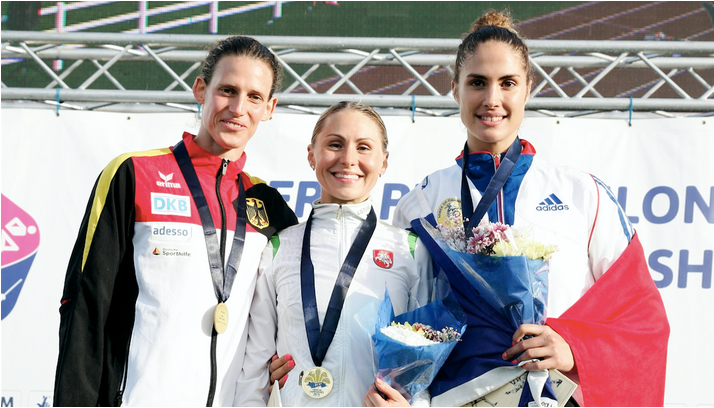 The London 2012 gold medallist surged from 11th place to secure a dramatic victory at the University of Bath ahead of France’s Elodie Clouvel and world champion Lena Schoneborn, who finished second and third respectively.

Asadauskaite went into the combined event 59 seconds behind leader Clouvel but was up to fifth spot by the end of the third 800-metres lap and went on to deliver an outstanding shoot to get out of the range ahead of Germany's Schoneborn.

Clouvel remained the frontrunner going into the final shoot but left at the same time as Asadauskaite, who stormed to an impressive triumph.

"It was a very good day - I had a good fence, a good ride and a good combined," said the gold medallist.

"This is a very good place and I really like it here in Bath - especially because I am champion."

With Asadauskaite having already secured a place at Rio 2016 through her World Cup Final win in Minsk earlier this year, the Olympic qualification spots went to competitors placed second to ninth.

London 2012 silver medallist Murray was one of only two athletes to dip under the 2 min 10sec mark in the swim, finishing 0.37 seconds behind Clouvel,  who posted the best time of 2:09.13.

Clouvel preserved her lead throughout the fencing with an impressive 25 victories and garnered a big enough points advantage to stay there going into the combined event despite an average ride.

But after three of the four shoots, she was eventually reeled in by Asadauskaite whose class shone through in the end.

"My shooting is not very good, but I will work on it for Rio," said Clouvel.

"I had very good running and was very fast but my shooting was so, so bad."