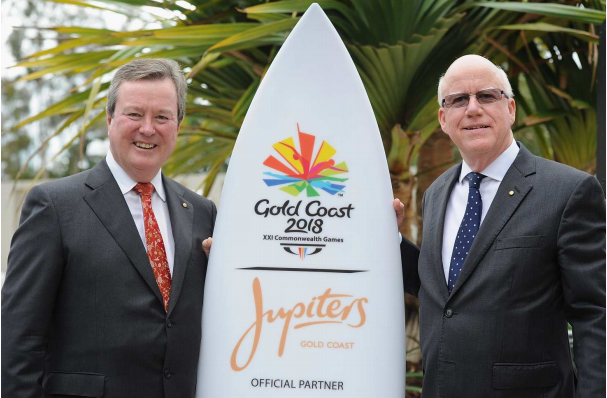 Jupiters Hotel and Casino has become the first sponsor of the 2018 Commonwealth Games on the Gold Coast, it was announced today.

The iconic Gold Coast landmark confirmed last week that a new six-star, 17-storey all-suite hotel tower - part of an overall AUD$345 million (£158 million/$249 million/€217 million) redevelopment - will open at the front of the existing hotel in the countdown to the Commonwealth Games.

John O'Neill, chairman of Echo Entertainment, owners of the hotel, claimed the synergies between the current transformation of Jupiters, and that of the Gold Coast through the Commonwealth Games, made for a natural partnership.

“The timing is perfect on so many levels,” said O’Neill.

“The legacy of the Games will be to again position the Gold Coast as an Australian destination of choice for tourists and investors, for decades to come.

“As a long-standing member of the Gold Coast community, Jupiters is proud to partner with the Gold Coast 2018 Commonwealth Games to help take advantage of this once-in-a-generation opportunity to propel the Gold Coast forward.

“The Gold Coast is renowned for its bold, optimistic and enthusiastic character. It was built on a spirit ofcreativity, unbounded potential and inventiveness.

“Jupiters embodies that spirit, as does the Commonwealth Games, so the fit is really compelling.

"Just like the Games, Jupiters and the Gold Coast are truly places where anything is possible.”

Gold Coast 2018 chairman Nigel Chamier congratulated Jupiters for their commitment to the country’s biggest event this decade at a special ceremony attended by Sally Pearson, the Olympic 100 metres hurdles champion who is currently recovering from injury which has forced her to miss the International Association of Athletics Federations World Championships in Beijing.

“Jupiters have demonstrated their absolute confidence in GC2018 by embarking on such an early agreement," said Chamier.

“We are further delighted to see that the $345 million expansion and refurbishment at Jupiters has now commenced, reinforcing their enthusiasm to be a key part in the changing face of the Gold Coast."

Echo Entertainment was a sponsor of last year's Australian Commonwealth Games team that competed in Glasgow - where Pearson won her second consecutive gold medal - and that they were eager to continue the association with the Games and that Gold Coast 2018 was a perfect opportunity, they claimed.

“The contribution sponsors make to GC2018 will play an important role in its success. I am delighted that the engagement with Echo that commenced with sponsorship of the Australian Team back in 2014 has now come to a positive outcome for GC2018," Chamier said.

“Announcing a Tier One sponsor more than 32 months before GC2018 is a great indication of the positive progress GOLDOC is making in its commercial program. We look forward to welcoming more sponsors on board in the near future."

“Echo Entertainment have confirmed their eagerness to be a part of the transformation of the Gold Coast,” she said.

“The Commonwealth Games presents an incredible opportunity for Echo Entertainment to support a significant local event and promote the Gold Coast to the world.”