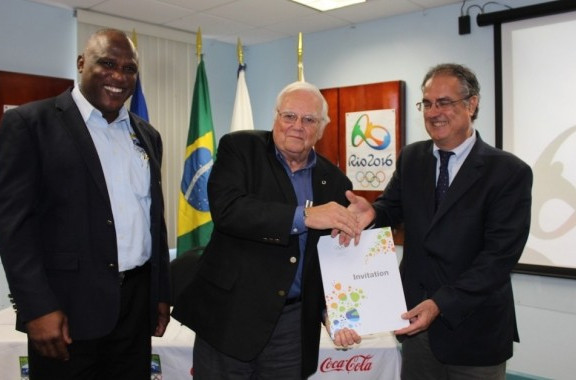 A special ceremony has been held at the Barbados Olympic Association (BOA) headquarters in Wildey to officially invite the Caribbean country to Rio 2016.

Stoute, also chairman of the Caribbean Association of National Olympic Committees, welcomed the official to the Olympic Centre and said that during an official visit he made to Rio de Janeiro last year, he was very impressed with progress and facilities that will be utilised during the Games, especially the Athletes' Village.

"The BOA is looking forward to working with the Brazillian Embassy as we make preparations to take our team to next year’s Olympic Games," he added.

The Ambassador then provided an overview of progress with less than a year to go until the Games begin, including an update on the developments in infrastructure and construction work.

With formalities completed, Barbados' athletes will be focusing on qualification ahead of trials next year, with the BOA confirming it will be providing "the necessary funding" for all local athletes who qualify for Rio.

Barbados will be seeking a first Olympic medal since Obadele Thompson secured a bronze in the 100 metres at Sydney 2000.

Three medals were won at last month's Pan American Games in Toronto, a silver in the 100m for Raman Gittens and bronzes for high jumper Akela Jones and Shane Brathwaite in the 110m hurdles.