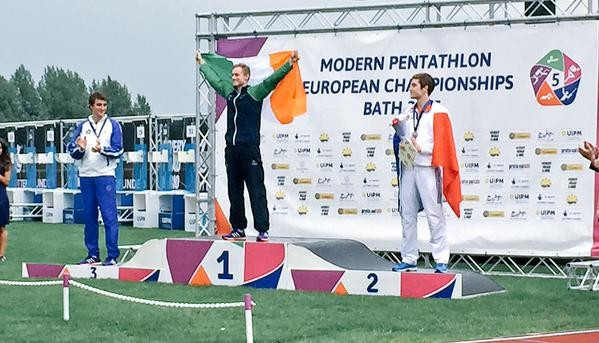 Ireland’s Arthur Lanigan-O’Keeffe produced a superb performance to earn gold in the men’s event of the Modern Pentathlon European Championships at the University of Bath, with the result securing him a Rio 2016 Olympic quota place.

The Irishman began with an excellent display in the fencing discipline, in which he recorded 23 victories, with only Russia’s Maksim Kustov bettering Lanigan-O’Keeffe’s tally after he was victorious in 24 bouts.

Kustov looked at one stage to be the man to beat after he followed up his first-place fencing finish by clocking a time of 2 min 00.44sec to lead the overall standings, but a disastrous riding event curtailed his ambitions for gold.

A refusal from his horse to attempt one of the fences was followed by knock-downs on two others and following the penalties, the Russian ended the discipline in 34th out of the 36 competitors, to drop to sixth overall.

Lanigan-O’Keeffe was able to make the most of Kustov’s misfortune as a seventh place finish in the swimming was followed by a clean ride, which ensured he would begin the combined event with a 20 second lead over his closest rivals.

By taking his time and shooting clean during the final event of the day Lanigan-O’Keeffe was able to seal success after he crossed the line in 11:21.95, to end the Championships on a total of 1,487 points.

"My fencing was the weakest this year so I really concentrated on it for the last month and I turned it inside out," he said afterwards.

"I just stuck to my process in the riding and I loved riding so it was comfortable.

"I worked on my shooting technique this year by joining a gun school and it has really paid off in return."

The Irishman’s victory was made more impressive by some of the notable names in the field, who had been left trailing behind him, such as International Modern Pentathlon Union (UIPM) Grand Final winner Riccardo De Luca of Italy and reigning Olympic champion David Svoboda of the Czech Republic.

De Luca though would have to settle for bronze on this occasion as France’s Valentin Prades was able to defend a one-point advantage over the Italian in the combined event, with both men involved in a thrilling sprint-finish.

Despite finishing 0.12 seconds faster than his opponent in 10:51.65, the gap did not prove sufficient to overhaul Prades in the podium positions with the French athlete ending the competition on 1,476 points to end as the runner-up.

However, it did prove enough for De Luca to finish a point ahead of Svoboda, with the Czech’s total of 1,474 only good enough for fourth position.

There was success for home favourite Joe Choong as the 20-year-old sealed one the eight Rio 2016 quota positions available at the Championships by finishing seventh on 1,464 points.