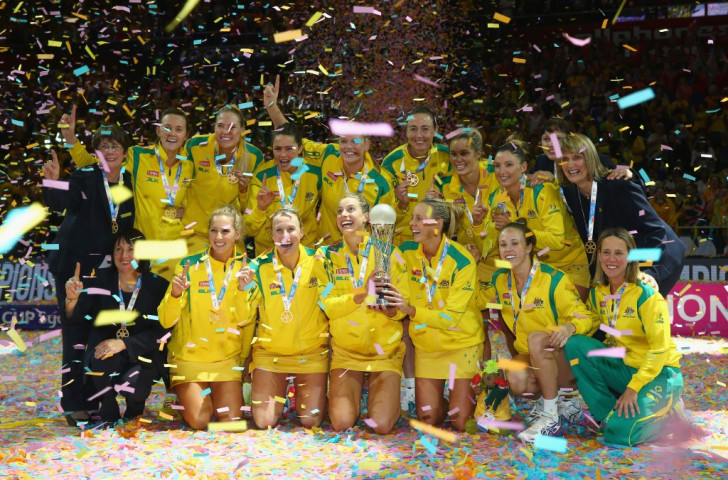 Hosts Australia sealed their 11th Netball World Cup title with a narrow 58-55 victory over arch-rivals New Zealand in front of a world record crowd at the Allphones Arena on the Olympic Park in Sydney.

The Australians, who suffered a shock defeat to the Silver Ferns in the group stage, established a decisive nine-goal lead after the first quarter on their way to claiming victory in a match that brought the tournament to a thrilling conclusion.

New Zealand could not keep pace with the Diamonds early on and, despite shading the final three quarters, were unable to haul back the deficit as the home nation secured their third successive crown.

In the bronze medal match, England avenged their loss to Jamaica at the same stage at the Glasgow 2014 Commonwealth Games to round off the podium and end the competition on a high with a 66-44 success.

The final began in frenetic fashion as Australia began to stamp their authority on the game, taking a 16-9 lead into the second quarter.

New Zealand, who went into the tournament’s showpiece contest with an unbeaten record, were not going down without a fight, though, and they managed to cut the deficit by one to trail 30-22.

The Australian Diamonds could not quite match their performance level from the opening stages as the New Zealanders attempted to haul themselves back into contention, and they went into the final period six goals behind.

The home side were able to maintain an advantage of five until the final minute when a late flourish from the Silver Ferns made for a nervy finale, but they held on for another famous win to send the majority of the 16,752 spectators inside the Arena into raptures.

"To finish like that in front of our home crowd, to have family here and to play with that particular group of girls, to play with Julie Corletto, it's wonderful to step into the defensive circle with such a wonderful athlete," Australia captain Laura Geitz said.

"World Cup netball, that's what it comes down to - hard work and just grinding away.

"Our attackers were just sensational and capitalised on every tip and touch that we got and the first quarter set us up nicely."

The bronze medal match-up was also an intriguing affair as England fell five goals behind after a rapid start from the Jamaicans.

The Roses, led by coach Tracey Neville, whose father Neville passed away during the early stages of the competition, however, launched a brilliant comeback to lead 28-23 at half-time.

From that point on, England controlled proceedings as they comfortably saw out a victory to give them their second consecutive Netball World Cup bronze medal.