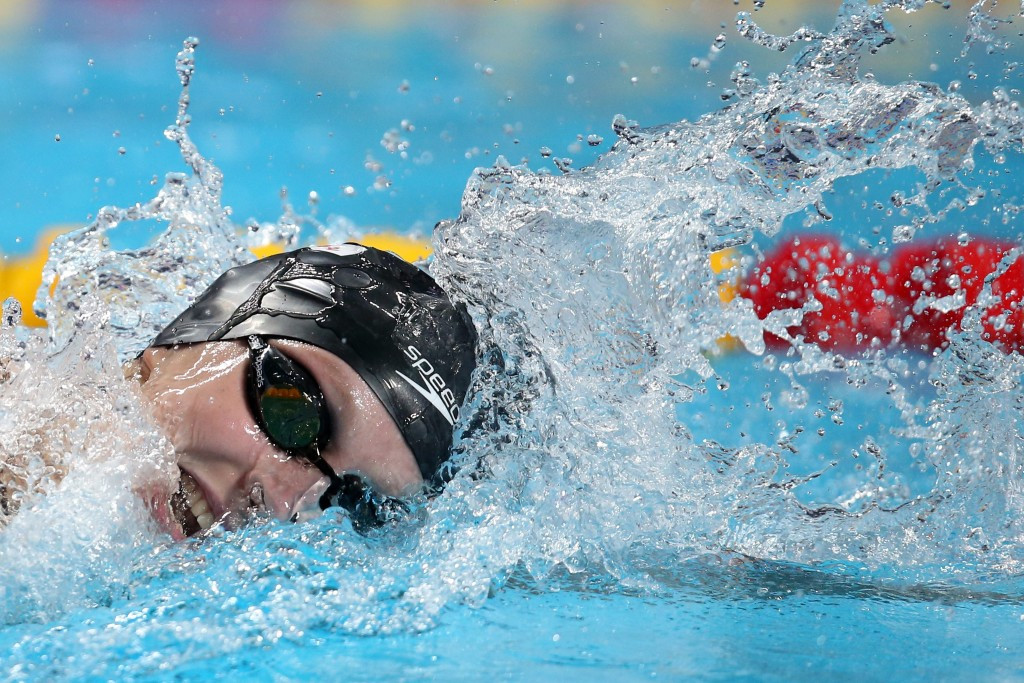 America’s Katie Ledecky smashed her own world record in the women’s 800 metres freestyle to earn her fifth gold medal of the International Swimming Federation (FINA) World Aquatics Championships, as the penultimate day of competition took place at the Kazan Arena.

Ledecky was bidding to become the first women to claim golds in the 200m, 400m, 800m and 1500m freestyle events at a single World Championships, while she had also earned 4x200m freestyle relay gold in the Russian city.

The teenager once again proved to be in a class of her own as she spent most of the distance racing against her own world record of 8min 11.00sec, eventually coming home in 8:07.39, with her nearest rival, New Zealand's Lauren Boyle, finishing more than 10 seconds adrift.

It was the ninth world title of Ledecky's career, having also scooped four gold medals as a 15-year-old at Barcelona two years ago.

Ledecky's world record was the 11th of these Championships,

A 12th was added by her compatriots Ryan Lochte, Nathan Adrian, Simone Manuel as they earned gold in the mixed 4x100m relay event, posting a time of 3:23.05, shaving 0.24 seconds of the previous mark held by Australia.

The United States were joined on the podium by The Netherlands and Canada, who posted times of 3:23.10 and 3:23.59 to secure medals in the event.

The US would be made to settle for silver medals, though, in both the men’s 50m freestyle and women’s 200m backstroke events, with Missy Franklin unable to defend her world title in the latter, having begun as the race favourite.

Franklin, bidding to secure her first individual title of the Championships, was leading at the 150m mark and appeared on course to claim gold in the event for the third consecutive time.

Her finishing time of 2:05.81, though, saw her finish 0.53 behind Emily Seebohm after the Australian was able to overtake her in the final stages to take the title, while Hungary’s Katinka Hosszu earned bronze in 2:06.84.

There was similar disappointment for Nathan Adrian in the men’s 50m freestyle as France's London 2012 Olympic champion Florent Manaudou finished 0.33 seconds ahead of the American to claim his third gold medal of the Championships in 21.19sec.

In the men’s 100m butterfly South Africa’s Chad Le Clos set an African record of 50.56 to hold off the challenge of Lazio Cseh to take gold, the Hungarian finishing 0.31 seconds behind to take silver.

History was made by newly crowned Singapore sportsman of the year Joseph Schooling, as the 18-year-old came home in 50.96 to earn his country’s first ever medal at a FINA World Championships, sealing bronze.

The newly crowned champion and world record holder over the 100m was delighted to see off the challenge of Denmark's 2013 winner Jeanette Ottensen, who finished second in 25.34.

“Though I'm in a good shape, the 50m is always a tight race,” Sjostrom said.

“I knew that Jeanette would go out fast but I tried to swim my own race, pacing myself as planned, as I know the second 25 metres is my strong side and I managed to keep calm and execute everything well.

“And of course, I'm really happy.”

Ahead of the final day of the Championships tomorrow, the water polo medal winners have also been decided, with the London 2012 Olympic champions Croatia taking on World League and World Cup champions Serbia in a eagerly anticipated men's final.

Serbia fell 2-0 behind early on but regained their composure to end the first quarter level at 2-2, before taking full control of the encounter to emerge 11-4 victors.

With Serbia having already booked their spot at Rio 2016 prior to the tournament, the bronze medal match between Greece and Italy had an added significance as they were bidding to seal the second berth available in Kazan.

Greece took the bronze, holding their nerve to win 4-2 on penalties after the tie had ended 7-7.

It proved enough to see them take the second Olympic spot, with Croatia's appearance in the final ensuring they will be able to defend their title next year having claimed the first position available.

While the reigning Olympic champions were beaten in the men's final, it was a different story in the women's event as the London 2012 gold medallists the United States came through a closely fought gold medal match against The Netherlands.

They held a 5-3 lead heading into the final quarter of the match and, although the Dutch team were able to reduce the deficit to just one goal in the dying minutes, the United States held on to record a 5-4 victory.

The bronze medal match between Australia and Italy also proved to be a tight affair, the Italians eventually emerging as 5-3 winners on penalties having been locked at 7-7 at the end of the four quarters.