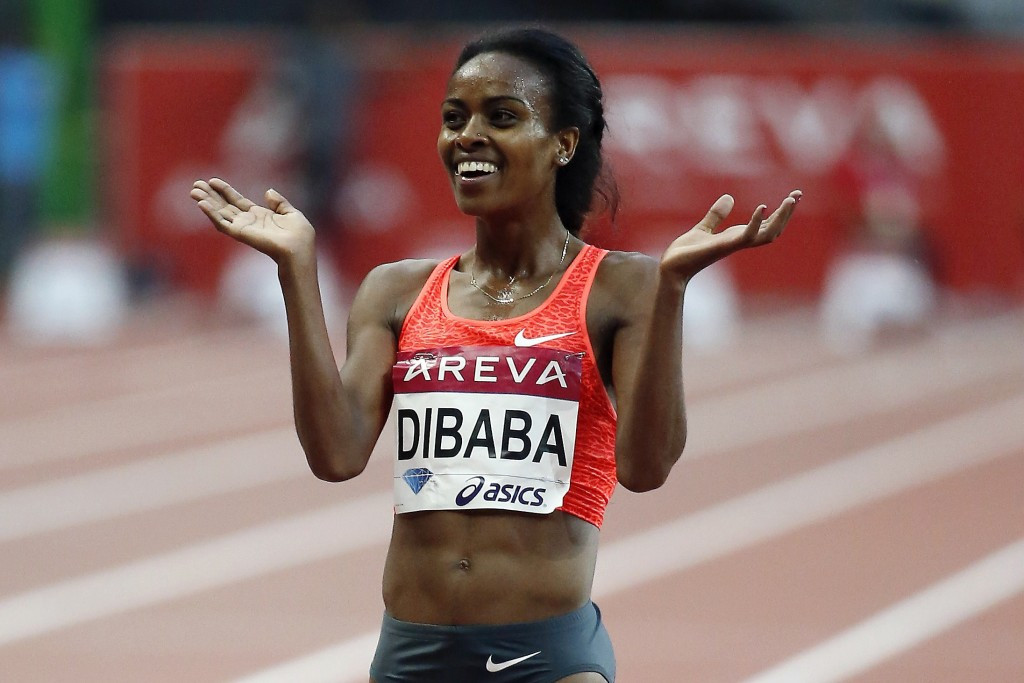 Qu’s mark of 3:50.46, set at the National Games in Beijing in 1993, was considered to be one of the most durable of world records, but the 24-year-old Ethiopian - who has tried in vain recently to beat the world 5,000m record held by her elder sister Tirunesh – achieved her objective in a perfectly paced race.

After America's world indoor 800m champion Chanelle Price had taken Dibaba through 400m in 60:31sec and 800m in 2:04.52 before stepping off the track, the Ethiopian still had European champion Sifan Hassan of The Netherlands for company.

After going through the bell in 2:50.3, the two-time world indoor champion kicked hard to claim her first outdoor world record.

Dibaba had not specifically said she was seeking to break the world record, although she had indicated beforehand that she felt in shape to run very fast after having altered her training to put greater emphasis on the outdoor season.

Her effort, nevertheless, came as something of a surprise in a race billed as a showdown between Hassan and Jennifer Simpson of the United States.

Hassan’s competitiveness was rewarded with a national record of 3:56.05 in second place, with Shannon Rowbury of the United States clocking an Americas record of 3:56.29 in third place, just ahead of  Simpson, who recorded 3:57.30 and Britain’s Laura Muir, who ran 3:58.66, one of eight personal bests recorded in a memorable race at the Stade Louis II.

It was a memorable night for 1500m running all round as Kenya’s Asbel Kiprop produced the fifth fastest time ever run in the men’s race, 3:26.69.

Britain’s Mo Farah, who made his first competitive appearance since the emergence of doping allegations against his coach Alberto Salazar in relation to other athletes in his group when he won the 5,000m at the Lausanne Grand Prix earlier this month, sharpened up for next month’s IAAF World Championships in Beijing in a super-swift  metric mile.

Farah finished fourth in 3:28.93 - a fraction slower than the European record of 3:28.81 he set two years ago at the same meeting  - behind Kiprop, the double world and former Olympic champion, whose time was one which only Bernard Lagat of the United States and Hicham El Guerrouj of Morocco, whose 1998 world record stands at 3:26.00, have bettered.

Algeria’s Olympic champion Taouflik Makhloufi was second in 3:28.75, with third place going to Morocco’s Abdelaati Iguider in a personal best of 3:28.79.

Both performances were personal bests.

He then accused the organisers of next week’s IAAF Diamond League in London of hypocrisy for barring him.

The Anniversary Games at the newly re-opened Olympic Stadium will not see the 2004 Olympic champion in action - as UK Athletics operates a policy of not inviting anyone who “currently brings the sport into disrepute".

As Gatlin pointed out, however, his US colleague Mike Rodgers, who served a nine-month ban for use of a banned stimulant, has been given a place in the 100m.

"But I’ve seen other athletes that have been in my situation in those races, so that kind of contradicts it doesn’t it?”

On an epic night of middle distance running, the 800m saw the emergence of a relatively unknown new contender in Amel Tuka, a 24-year-old from Bosnia and Hercegovina who finished sixth in last year’s European final.

Ethiopia’s world indoor and outdoor champion Mohammed Aman, meanwhile, had a less than happy time on a muggy night, finishing eighth in 1:44.09.

In the triple jump, America's Olympic champion Christian Taylor maintained bragging rights over his close rival Pedro Pablo Pichardo, following up his victory in Lausanne - when he recorded a personal best of 18.06m – with another maximum of four points thanks to a second round effort of 17.75.

Pichardo, who has a best of 18.08 this season, responded with 17.73 two rounds later the Cuban could not improve on that, and thus found his lead in the Diamond Race being cut  to 16-14 by the American.

Having suffered consecutive defeats in the Diamond League in Paris and Lausanne, France’s Olympic pole vault champion and world record holder Renaud Lavillenie got back to winning ways with an effort of 5.92m, 10 centimetres clear of his nearest challenger Konstantinos Filippidis of Greece.

Tero Pitkamaki of Finland, world javelin champion in 2007, produced a fourth-round effort of 88.47m to win, despite world champion Vitezslav Vesely of the Czech Republic responding with 85.44m in the next round

Francena McCorory of the US won the women’s 400m in 49.83sec, the fastest recorded this season.

Earlier in the evening, Joe Kovacs of the United States produced a Diamond League and meeting record of 22.56m in the shot, the best achieved this year.