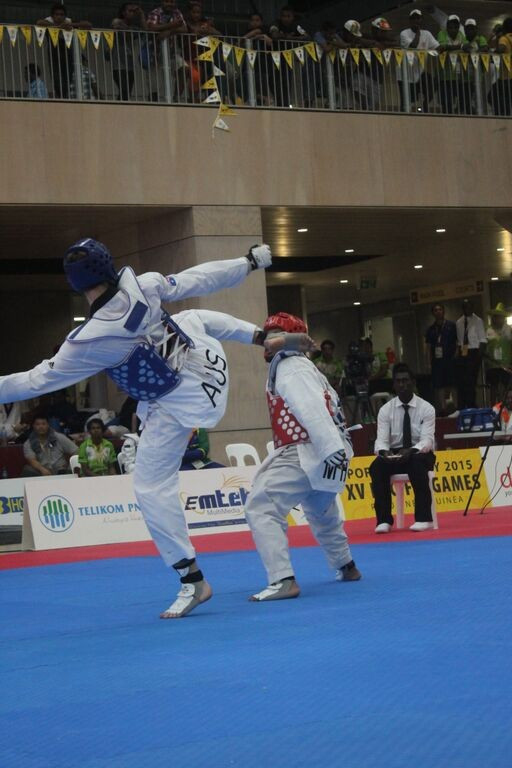 Australia’s men’s taekwondo team followed in the footsteps of their female counterparts as they produced a dominant display to claim five of the eight gold medals available at the Taurama Aquatic and Indoor Centre on the penultimate day of Port Moresby 2015 action.

London 2012 Olympian Safwan Khalil won in the second round of his bout with Tahiti’s Teddy Teng to secure the under 58 kilograms title.

Brother-in-law Jack Marton then defeated Peter Babka, also of Tahiti, in the under 74kg class with his fight ending 13-0 just 20 seconds into round two.

Khalil's wife Carmen Marton and sister-in-law Caroline Marton won two of four women’s gold medals for Australia yesterday, owing to success in the under 53kg and under 62kg categories respectively.

Marton, 23, revealed he felt a bit of pressure after his two sisters won gold and his brother-in-law took the top prize.

“At the beginning of the day, I was feeling a bit heavy but fight after fight I kept building and building,” he said.

“I was not even thinking of pressure.

“When everyone else wins, you just want to do the same as they do.”

Auger's team-mate Thomas Afconcenko claimed victory in the under 68kg class as the coach of Vanuatuan opponent, Bruce Johnathan, threw in the towel towards the end of the second round.

Johnathan, who earlier had to seek medical attention for an injury to his left knee, was followed onto the podium by Tahiti’s Manu Huuatua and New Caledonia’s Julien Bessieres.

Shkata's compatriot Daniel Stafstrom was leading from the start in the under 87kg class, but Tahiti’s Waldeck Defaix fought back late in the third round.

He then won with a golden point after 41 seconds.

In the first of the gold medal finals, Papua New Guinea's Bobby Willie scored seconds into the first round of the under 54kg division against the Solomon Islands’ Isaac Pat Myrie, and never looked back.

In the final fight of the day, Tahiti’s Lloyd Tuarai Hery overpowered New Zealand’s Nicolas Dorman to win gold in the over 87kg category.

Tere-Apisah is one of few athletes at Port Moresby 2015 to win gold in every event in which she participated having already triumphed in the team event, women’s doubles and mixed doubles.

There were also three gold medals handed out in women's boxing today for the first time in the 52-year history of the Pacific Games with hosts Papua New Guinea claiming gold in the 51kg and 75kg classes through Philo Magaiva and Debbie Baki Kaore respectively.

Nauru's Rachelle Bonillo came away with silver in the 51kg, a category in which there were not any bronze medals awarded, while second place went to Tahiti's Edith Tavanae in the 75kg followed by Guam's Gianna Sarusal.

The 60kg category was won by Jennifer Chieng of the Federated States of Micronesia with Papua New Guinea's Raphaela Baki the runner-up, and Tahiti's Hatara Lahana Ioane one of two bronze medallists, alongside Tonga's Pueki Fifita.