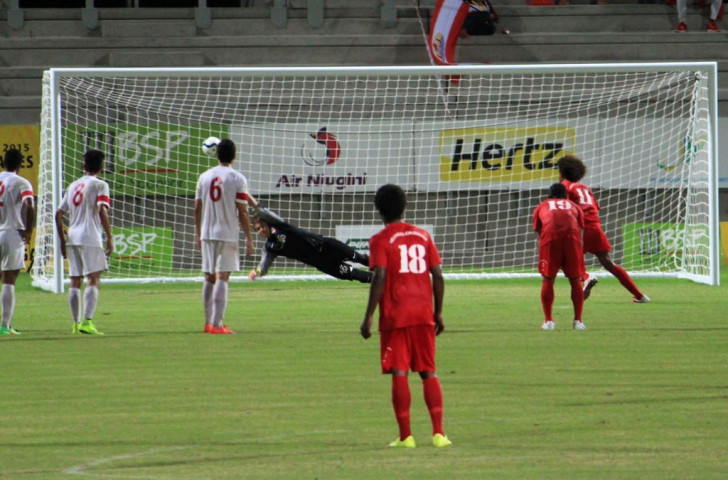 Jim Ouka gave the 2007 and 2011 gold medallists the lead on the half-hour mark, before Raphael Oiremoin doubled their advantage from the spot midway through the second-half.

More drama was still to come as Tahiti’s Tevaimoana Meslien was given a straight red card for an attempted headbutt on Ouka, with the New Caledonia player also dismissed in the same incident for retaliation.

Following the two players’ acts of petulance, Tahiti were unable to fight their way back into the match as New Caledonia successfully held on to their Pacific Games gold medal, seeing out a well-deserved victory with ease.

The match began at a frenetic tempo with the first clear-cut opportunity falling to Tahiti’s Fred Tissot but, following a free-flowing move, his attempted dink over the onrushing goalkeeper lacked both pace and direction, allowing New Caledonia to clear their lines.

New Caledonia themselves had a couple of half-chances before they took the lead on the half-hour mark.

Tahiti gave the ball away in a dangerous area and it proved costly as Nathanael Hmaen picked up on the loose ball and found Ouka on the edge of the box.

The striker was then allowed to turn and fire a low shot beyond the grasp of Temauiarii Crolas.

Tahiti's goalkeeper then had to be at his best barely 60 seconds later to deny New Caledonia a quick-fire second, saving a point-blank effort from Joseph Athale.

That pattern continued in the second-half with Tahiti again the architects of their own downfall, gifting their opponents the ball in bad positions seemingly at will, and they had to rely on Crolas’ speed off his line to deny Ouka a second goal.

The defending champions doubled their advantage 15 minutes from time as Meslien fouled Oiremoin in the penalty-area.

The New Caledonia player picked himself up and converted from the penalty-spot to effectively clinch gold.

Tempers began to fray among the Tahitian team and Meslien was sent-off for his act of stupidity, with Ouka also being dismissed in an incident which tainted what was an entertaining contest.

After that moment of madness from both sides, the match rather petered out, allowing New Caledonia to claim a 2-0 win and with it their sixth Pacific Games title.

Papua New Guinea sealed their first men’s football medal since  Nouméa 1987 by claiming a 2-1 victory over Fiji, who had booked a place at next year’s Olympic Games in Rio de Janeiro by beating Vanuatu last Sunday (July 13), in the bronze medal match to the delight of the home crowd.

After Patrick Aisa‘s fortuitous effort had been cancelled out by a wonder strike from Fiji’s Tony Tuivuna, Papua New Guinea's captain Alwin Komolong towered above the defenders at the back post following a pinpoint set-piece delivery in added time and powered home a header to secure bronze for his country in dramatic fashion.

“This is huge for men’s football,” Papua New Guinea coach Ricki Herbert, who had coached New Zealand at the 2010 FIFA World Cup in South Africa, said.