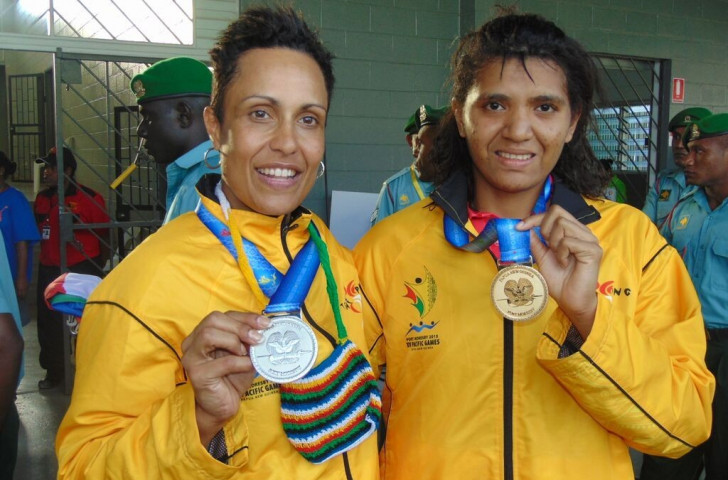 Hot favourite Lynette Vai of Papua New Guinea claimed Pacific Games women’s squash gold as she recovered from a set down to beat compatriot Eli Webb in a thrilling final at the Steamships Racquet Club today.

The venue was in shock as Webb began the brighter of the two players and took the opening set 11-8,.

It prompted a response from Vai which her teammate could not deal with.

She levelled  proceedings, winning the second set 11-1 and then claimed the third set.

That seemed to knock the wind out of Webb’s sails as her performance slowly began to deteriorate which the ruthless Vai took advantage of, winning the fourth set by the same margin as the second to ensure she topped the podium.

“It wasn’t a good start - my nerves took over,” Vai said.

“It was more of a challenge than the last time we played and I wasn’t expecting it.

“But I had a break, calmed myself down and tried again.

“I became more patient, settled in and got used to her game.”

Papua New Guinea were not quite able to secure the double, however, as Nicolas Massenet of New Caledonia beat home favourite Madako Suari Junior in four sets to clinch gold in the men’s tournament.

Massenet got off to the perfect start, winning the first set 11-9 and the second 12-10.

Madako Suari Junior reacted the better of the two players to a brief power failure on court, however, which halted play for around 15 minutes, forcing a fourth set against the run of play.

Massenet in the end had too much quality for his rival, he reigning supreme in the fourth to seal yet another gold for his nation.

“The Pacific Games for me is like the Olympic Games,” Massenet said.

“It was a very physical match and I think my fitness was the key to my victory.

“Without my fitness I think I would have lost.”

The contest for bronze was an all New Caledonia affair as Gael Gosse overcame Yann Lancrenon in straight sets.