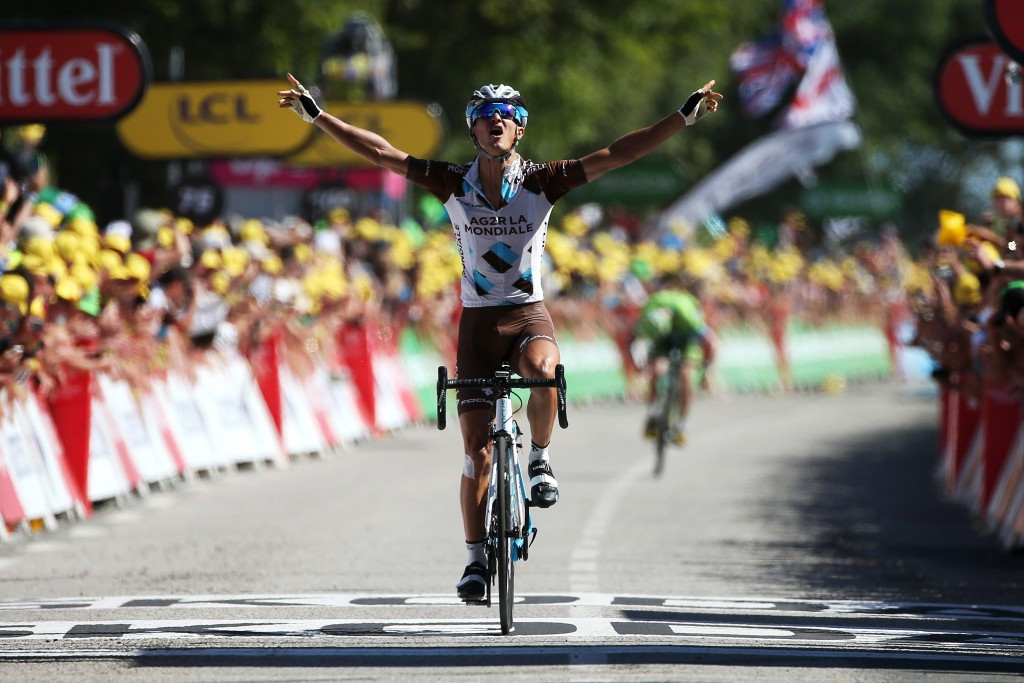 Alexis Vuillermoz claimed France’s first stage victory of the 2015 Tour de France after he accelerated clear of the main field in the closing kilometre of stage eight from Rennes to Mûr de Bretagne.

French cyclists seemed determined to make an impression on the stage as Sylvain Chavanel, Romain Sicard and Pierre-Luc Périchon formed part on an early four-man breakaway, where they were joined by Poland’s Bartosz Huzarski.

It was Huzarski, however,  who would prove to be the most committed rider to staying clear of the main field as the race approached the final climb at the Mûr de Bretagne, as he was also part of the day’s second break with Denmark’s Lars Bak and fellow Pole Michal Golas.

Their move stayed away until the closing eight kilometres of the 181km-long stage, as the likes of Ireland’s Dan Martin, Spain’s Alejandro Valverde and Slovakia’s Peter Sagan eyed up the victory with the peloton approaching the final climb of the day.

Chris Froome, wearing the yellow jersey, was the first to launch an attack on the incline as the Briton looked to extend his overall advantage at the head of the race.

His effort was countered by Vuillermoz, though, who was able to move clear to the finish in 4 hours 20min 55sec.

“I knew this kind of finish suited me as I am a punchy climber,” he said.

“I haven't been surprised to ride away but it's been hard to stay away.

“It's been a violent effort.

“In the first few minutes after I passed the line, I wasn't realizing that I had made it.”

Martin cut a frustrated figure after seeing a chance to claim a stage victory pass him, ending five seconds behind the winner, while Sagan endured another near miss having finished fourth on the stage behind Valverde.

The stage proved to be a positive one for Froome as although he was unable to make further gains on Spain’s Alberto Contador and Colombia’s Nairo Quintana, he was able to extend his lead by a further 10 seconds on the defending champion, Vincenzo Nibali.

Froome is now 1:48 ahead of the Italian, but while Nibal’s threat appears to be less of a factor, the 2013 champion is being forced to keep a close eye of Tejay van Garderen.

The American has maintained his excellent form from the Criterium du Dauphine and lies just 13 seconds off the lead in third, a further two seconds behind second place Sagan.

Tomorrow’s stage could see the extending of time gaps between the main general classification contenders as the only team time trial of the race is due to take place from Vannes to Plumelec, with the teams set to complete a 28km course.