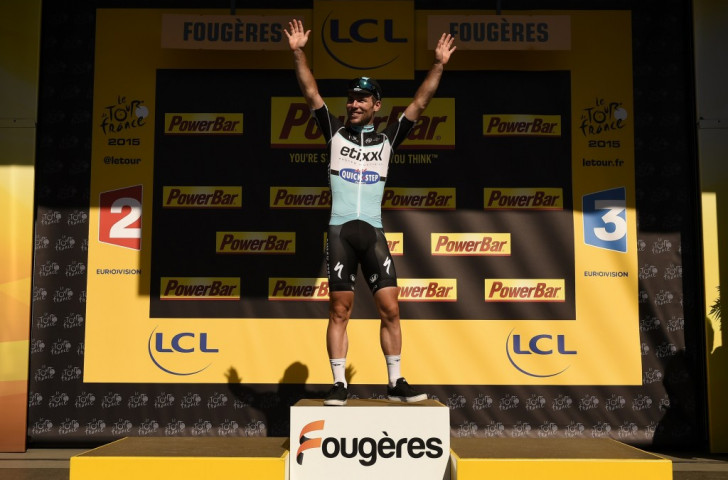 Britain’s Mark Cavendish claimed his first stage win at the Tour de France since 2013 by sprinting to victory at the end of the 190.5 kilometres seventh stage from Livarot to Fougeres.

Cavendish’s task had been made harder at the by the news that his team-mate and race leader Tony Martin of Germany had been forced to withdraw from the race due to breaking his collarbone in a crash in the last three kilometres of yesterday’s stage to Le Havre.

It meant the Cavendish would be deprived of one of his key lead-out men on the run-in to the finish, while the peloton would be without a yellow jersey en route to Fougeres as the second-placed Chris Froome declined to move into the jersey for the stage due to the circumstances surrounding Martin being forced to give up the race lead.

The relatively flat profile of the stage was always going to play into the hands of the sprinters, as due to the limited number of opportunities for bunch sprints at this year’s Tour their teams kept the day’s breakaway close throughout the day.

By  being involved in the breakaway, Eretria’s Daniel Teklehaimanot was able to earn an additional point to maintain his lead in the king of the mountain’s classification, after becoming the first African rider to take the jersey yesterday.

The main field were all brought back together in the final 10km with Team Katusha massing on the front of the peloton to set up the sprint for their Norwegian sprinter Alexander Kristoff.

It was Cavendish, though, along with Slovakia’s Peter Sagan and Germany’s Andre Greipel who would again battle for supremacy.

Greipel was looking for his third stage win of the Tour, although like Cavendish was without one of his key lead-out men in New Zealand’s Greg Henderson, and he looked well placed to power away to the line in the remaining metres.

Yet the German was to be denied by Cavendish, who sprung out of his slipstream to secure his 26th victory at the Tour de France, finishing in 4 hours 27min 25sec, with his triumph adding to the earlier stage wins for his Etixx-Quick Step teammates Martin and Zdenek Stybar of the Czech Republic.

“Today it was about kind of not being impatient anymore but I almost left it too long,” said Cavendish, who is now closing in on Frenchman Bernard Hinault, whose 28 stage victories put him second behind the all-time record of 34 held by the great Belgian, Eddy Merckx.

“I had seen that Alexander Kristoff had two lead out men, I waited for him to go and I was almost too late.

“If André Greipel had pushed me towards the barriers, I would have lost but he's a gentleman, he sprinted straight.

“I had the same power the other days but it was a question of timing to make it a victory this time.”

With the main field crossing without any major incidents Britain's Froome moved into the yellow jersey for the second time in the race, with Sagan’s third place finish on the stage seeing him earn more time bonuses to move into second on the general classification and just 11 seconds adrift of the leader.

Tomorrow’s 181.5km stage from Rennes to Mûr-de-Bretagne might present the Slovakian with the opportunity to end his frustration and claim a stage victory, as the incline to the finish is likely to prevent his sprint rivals from featuring at the finish.

It was also confirmed today by the International Cycling Union (UCI) have notified Team Katusha's Luca Paolini of an adverse analytical finding of benzoylecgonine metabolite, cocaine, in his sample from July 7, with the Italian rider being immediately removed from the Tour de France and suspended from competition until his case is resolved.