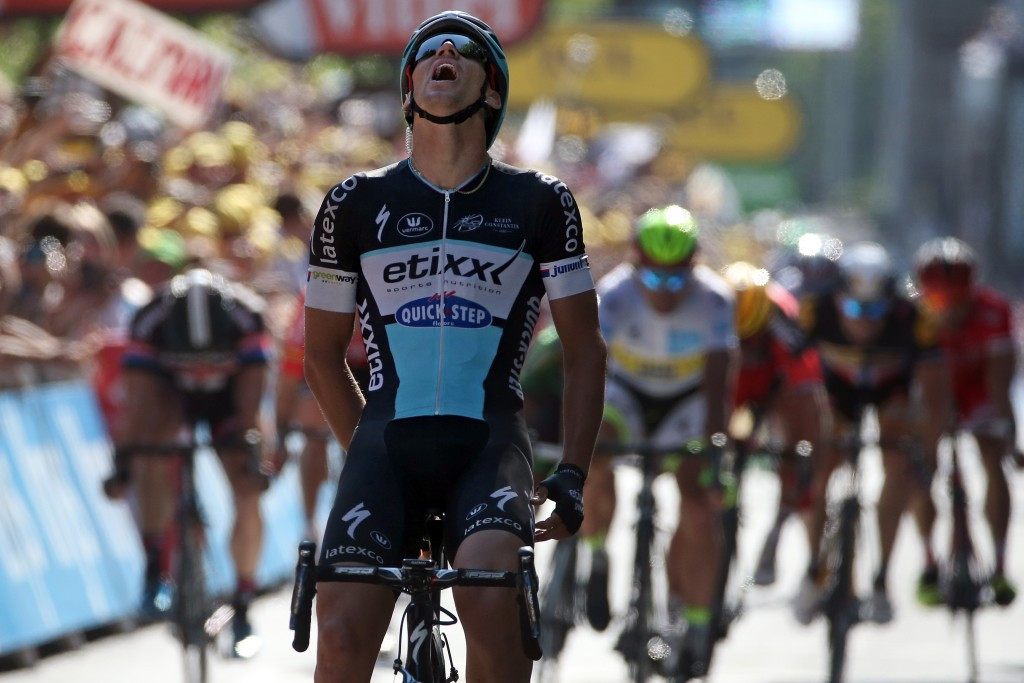 Czech Republic's Zdenek Stybar earned his first victory at the Tour de France after pulling clear to surprise the sprinters in the closing kilometre of the 192km sixth stage from Abbeville to Le Havre, although his team mate and race leader Tony Martin of Germany is out of the Tour having broken his collarbone in a crash.

Having been involved in the breakaway two of the last three days France's Perrig Quémeneur again attacked the peloton early on and was joined by Eritrea's Daniel Teklehaimanot and The Netherlands' Kenneth van Bilsen, a trio who stayed clear for much of the stage.

Teklehaimanot, riding for the first African registered team in the Tour de France's history MTN-Qhubeka, was able to make a mark of his own in the record books of the race as he became the first African wearer of the king of the mountain's jersey having taken maximum points at three classified climbs on the route.

However the break would not stay away all day, with Van Bilsen the final man to be caught at 3km to the finish, which would prove to be an uphill run-in to the line favouring the like of Slovakian national champion Peter Sagan.

The focus though was shifted back to the overall leader of the race as Etixx Quick Step's Martin was caught up in a crash, which also took down defending champion Vincenzo Nibali of Italy and Colombia's Nairo Quintana.

Although they were both fine, Martin joined fellow time-trial specialist Fabian Cancellera of Switzerland in crashing out of the race wearing the yellow jersey.

“I was extremely unlucky, I can't really remember what happened," Martin said afterwards.

"I touched the wheel of the rider ahead of me.

"It's the Tour, luck and bad luck are very close together.

It's often the way accidents happen, you're not going that fast and then you fall over each other with all your weight."

Amidst the confusion following the crash, Martin's team mate Stybar was able to steal a march on the rest of the field with a well timed attack to take victory in 4 hours 53min 46sec, with Sagan again left frustrated in second and France's Bryan Coquard third.

Britain's Chris Froome will now resume the race lead due to Martin's exit and he will be hoping to avoid any similar incidents as the sprinters teams aim to victory following a 190.5km stage from Livarot to Fougères tomorrow (July 10).