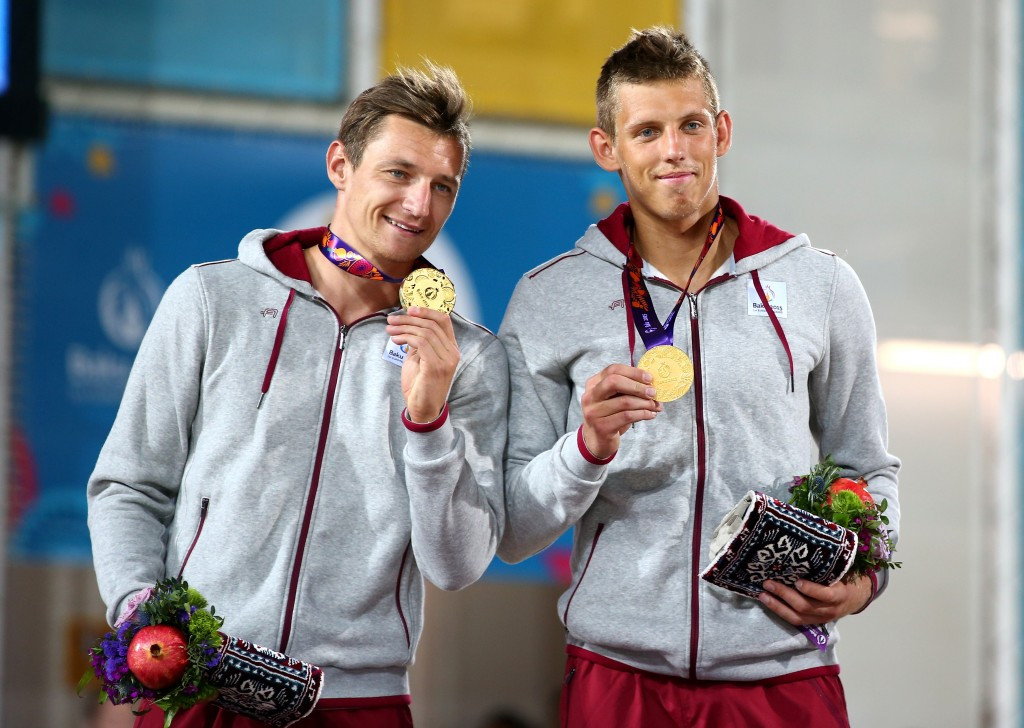 London 2012 bronze medallist Martins Plavins and Haralds Regza delivered the first gold medal of the European Games for Latvia as they beat Russia's Dmitry Barsouk and Yaroslav Koshkarev 2-1 in the final of the beach volleyball.

But it was just as emotional a night for 41-year-old Premysl Kubala, who earned bronze for the Czech Republic - with a 2-0 win over Switzerland - partnering 24-year-old Jan Hadrada, having played at the beginning of his career with his team-mate’s father, Milan.

"I did it at the end of my long career with my very good friend. I was playing indoors with his father but now I have a medal with his son,” Kubala said

"This game was a dream for us.

"We didn't expect this result.

"I could finish my career [now] but we want to try to qualify for Rio for the Olympic Games.

"We know it will be very difficult."

The Latvians, a temporary partnership for this championship, played as if they had been a combination for years as they recovered their impetus after Russia had drawn level after the second set and took control of the rest of the game, sealing gold with a scoreline of 21-16, 18-21, 15-10.

It was a popular victory in an arena which was increasingly fllled with the chant of “Lat-vi-a, Lat-vi-a” as the game wore on.

Plavins laughingly changed his estimation of his new partner, whom he had described as “OK” after their semi-final win.

“He is still OK...for sure, he is better, he played very well in the third set.”

Plavins played down the importance tactics had played in the win: “In the final you don't want too many tactics, the most important is just serve and side-out [winning points on the opponent's serve] and we did those well which is why we won.”

He displayed a dry humour when asked if he and his newfound partner would remain together, or whether both would rejoin their normal partners next week.

“If we played one more tournament maybe not, we would come third or fourth but for now it is perfect.

“I have played both of our opponents a lot and they have won more against me than they have lost."

There was a symmetry to the match, with the taller and rangier members of each team, Regza and Koshkarev, dominating the net while their smaller, more experienced partners - Plavins, who won his Olympic medal with Janis Smedins, is 30 and Barsouk 35 - directed play from the back court.

That pattern held good for the Czechs too, for whom the 24-year-old Jan Hadrava was partnered by 41-year-old Premysi Kubala.

Russia had arrived in the final after a towering struggle with Switzerland in the morning where they saved several set points at 1-0 before coming back to win in straight sets.

Barsouk and Koshkarev won five successive points, helped by consecutive spike errors from Latvia at 16-16 and 17-16, to take control of the second set.

In the end, though, the wiliness of Pavins and the athleticism of Regza proved too much for them.

"We made a lot of mistakes because our nerves weren't good,” said Koshkarev.

“But it is good that we got second place in the first European Games.

"It is great to have a medal, but it is a silver, it's good, but we wanted the other one.

"This was our eighth game [in this tournament], so we were very tired and we were not so quick and fast."