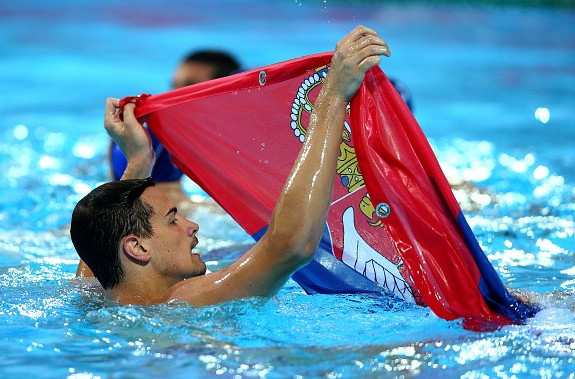 Spain suffered a heartbreaking European Games water polo finals defeat for a second night in succession after Serbia fought back brilliantly to snatch an 8-7 victory after trailing for virtually the whole match here tonight.

Serbia delivered an exhibition of defensive solidity, with goalkeeper Stefan Todorovski leading the way with a string of outstanding saves as they soaked up everything the Spanish could throw at them before countering with ruthless efficiency in the final quarter.

After the agony of Spain’s women losing via a penalty shootout to Russia last night, it had seemed as if their male counterparts were on course to make amends.

Captain Alex De La Fuente led from the front with a well-taken goal from the centre line early in the first period and, although the Serbs always stayed within touching distance, the Spanish always appeared quicker to the ball and more incisive in attack.

If it had not been for the brilliant Todrovski, they would surely have scored many more.

In response, Marko Jankovic scored three times for Serbia while five other players found the net.

The match was still finely balanced at 6-5 to Spain  heading into the final period before the Serbian fitness began to show.

First, Petar Kasum levelled the score up yet again before Dorde Vucinic dinked the ball into the net to give Serbia lead for the first time all evening.

Moments later, Jasmin Kolasinic squeezed the ball home at the near post to double the advantage.

Spain fought hard, with a disallowed goal and an effort which nearly broke the crossbar before they finally pulled one back.

It proved too little too late, though, and as the final buzzer rang, Serbia’s players joined together in a huddle of ecstatic victory in the water while the disconsolate Spaniards climbed wearily out of the pool.

"It is just an amazing feel, I don't know what to say,” Todrovsky said.

"We are so very happy now.

“My team-mates are amazing, but congratulations to the other team.

"Defence is our style, it is our business, that is how we play and how we won."

Earlier, Greece had claimed the final place on the medals podium, beating Croatia 11-10.

It was fitting for them that Hellenic Olympic Committee President Spyros Capralos was on hand to present the medals, although it was for Serbia that cheers were the loudest.