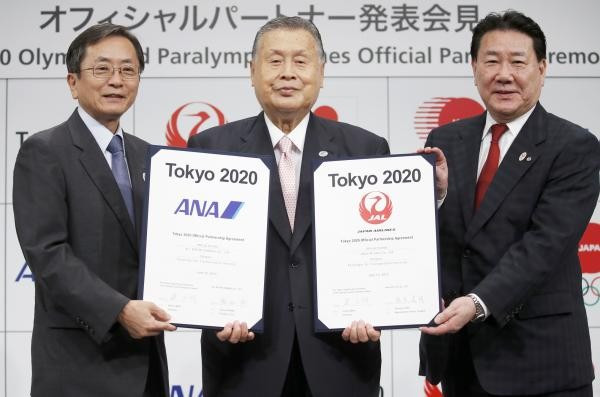 Tokyo 2020 has announced All Nippon Airways (ANA) and Japan Airlines (JAL) as its first Official Partners, under the category of “Passenger air transportation services”.

The addition of two of Japan’s leading airlines onto the second domestic tier of the Tokyo 2020 Sponsorship Programme brings the total number of Partners to 15, including 13 Gold Partners.

ANA is an Official Partner of the Japanese Olympic Committee, supporting its athletes that participated at Turin 2006, Beijing 2008, Vancouver 2010, London 2012 and Sochi 2014 Olympic Games.

Its contract with Tokyo 2020 is effective as of now until December 31, 2020, as is that of JAL, which will actively participate as a member of the ‘All Japan’ team, supporting the efforts of Japan's national Olympic and Paralympic teams.

Back in April, Tokyo 2020 added leading Japanese mega-banks Mizuho and Sumitomo Mitsui Financial Group to its ever growing list of Gold Partners.

“Following on from our selection of two companies in the banking category, we are delighted to welcome ANA and JAL as Official Partners in the single category of "Passenger air transportation services", which will further serve to build a Japan-wide momentum ahead of the 2020 Games," said Tokyo 2020 President Yoshiro Mori.

ANA is set to play an important role in the field of air transportation as part of the Tokyo 2020 Olympic and Paralympic Games, and is striving to maintain the strong foundation of security and trust it claims to have established over the years.

Their team, including all employees and senior management personnel, will be working towards expanding their network and improving the quality of their services, not just as a means of transportation for Japan's national Olympic and Paralympic teams, but also as a gateway to Japan.

“We believe that sport provides people with dreams, hope, and encouragement."

JAL was selected to transport the Olympic Torch from Athens to Japan for the Tokyo 1964 Olympic Games.

By signing the partner agreement, they will look to leverage the experience they have accumulated to transport Japan's national teams and delegations.

They will also make further efforts to expand their activities to support the advancement of sport and foster young athletes.

“Ever since the Tokyo Olympic Games in 1964, JAL has supported Japan’s national teams - who continuously inspire us in the global sports arena such as the Olympic and Paralympic Games, by providing safe and comfortable air transportation,” said Yoshiharu Ueki, representative director and President of JAL.

“As an Official Partner of the Tokyo 2020 Olympic and Paralympic Games, we will use our experience to the maximum to support them and promote the advancement of sports through activities to develop and provide backup to young athletes.

“Just as the previous Tokyo Olympic Games helped to form the foundations for Japan's present growth, we will do our utmost to make the Tokyo 2020 Games the driving force behind Japan's new growth in the next 50 years.”