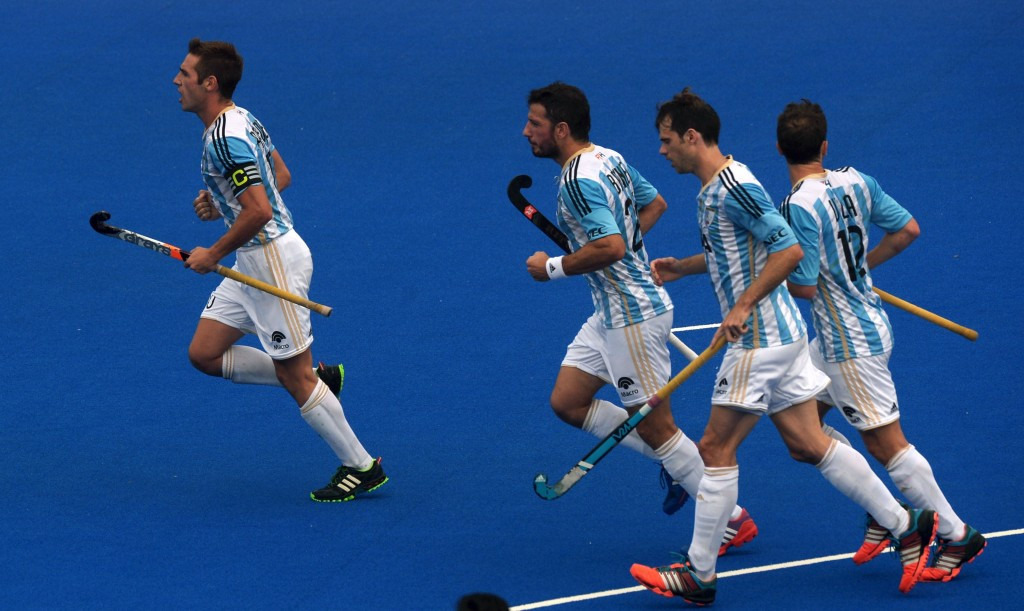 Argentina maintained their 100 per cent record at the Hockey World League semi-final event in front of their home crowd with a narrow victory over Spain as the last-eight matches of the competition were decided in Buenos Aires.

Having defeated Olympic champions Germany in their last Pool B match, the hosts were aiming to finish with a flourish against a Spanish side who had also booked their place in the quarter-final phase with a match to spare.

The tie proved to be a close fought affair with few clear cut goal scoring opportunities created by either side, however Facundo Callioni gave the home crowd at the CeNARD stadium something to celebrate with a fine solo effort, inside the final three minutes remaining, to help his side finish on a maximum 12 points from the four round-robin matches.

Elsewhere, Germany got back to winning ways by thrashing Canada 9-0, in a clash between two sides bidding to finish second in the pool and therefore securing a potentially easier quarter-final match with a Pool A team.

Florian Fuchs struck twice in the opening four minutes of the contest to settle any German nerves and Christopher Ruhr and Niklas Wellen then struck in quick succession to give the Olympic champions a comfortable advantage by the end of the first quarter.

A convincing victory was sealed by further strikes from Mats Grambusch, Moritz Furste, Tobias Hauke and Christopher Zeller, while Ruhr completed his brace.

“This was a good day and also a good reaction after the loss against Argentina,” Hauke said

“It was our aim today to work on our strengths, to play a good match and to defend at least the second place in the pool.

“I think we can be satisfied.”

By sealing second place in Pool B, Germany will now face South Korea in the quarter-final after they finished third in Pool A following an entertaining 3-3 draw with New Zealand, who having earned the runners-up spot in the pool are now scheduled to play Canada.

South Korea had stormed into an early 2-0 lead with goals from Oh Deakeun and Kim Youngjin only for New Zealand turned match around with Hugo Inglis, Phil Burrows and Simon Child putting their names on the score sheet.

The drama was completed in the dying stages of the match as Nam Hyunwoo struck home from a penalty corner to restore parity for the South Korean side.

The Netherlands overcame Japan 3-1 in the final Pool A match, with a brace from Billy Bakker and a Mink van der Weerden penalty corner goal proving enough to see the Olympic silver medallist end the pool stage unbeaten on 10 points from their four matches, and saw them set up a quarter-final against Spain, who finished fourth in Pool B.

By finishing in fourth position in Pool A after one win and three defeats, Japan will begin their quarter-final against hosts Argentina as massive underdogs, while Austria and Egypt who failed to win a match in their respective pools will meet to decide who will claim a ninth place finish at the competition.

The quarter-final and classification match are due to take place on Thursday (June 11), with semi-finals scheduled for June 13, before the final takes place the following day on June 14.