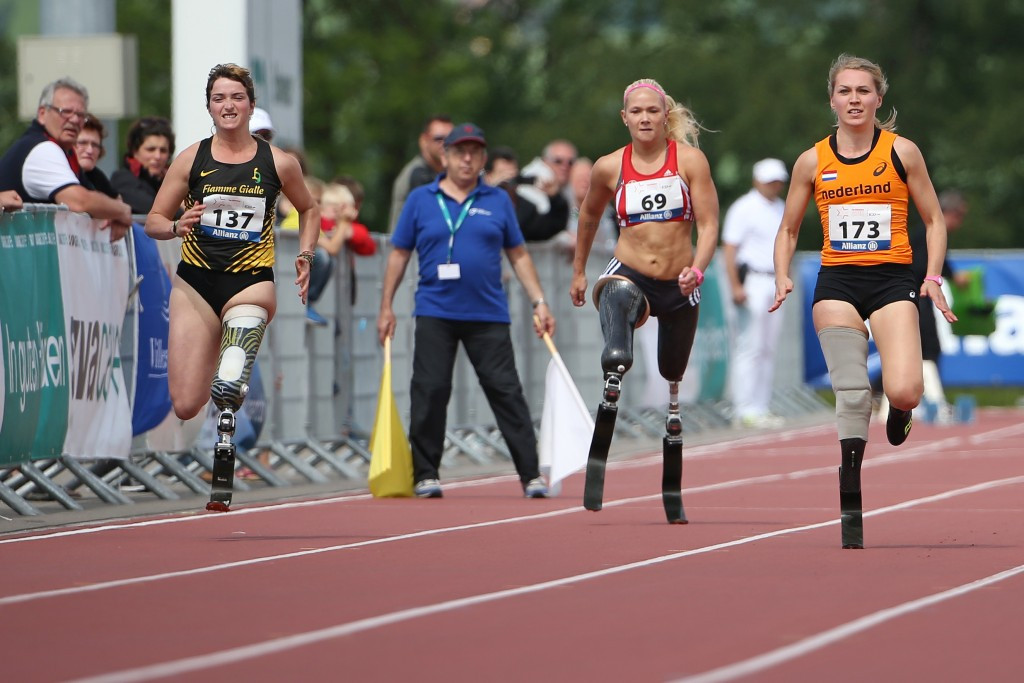 A further four world records were broken on the final day of the International Paralympic Committee (IPC) Athletics Grand Prix in Nottwil, taking the total for the event to nine.

The Netherlands’ Marlou van Rhijn, who bettered her own 100 metres T43 world record yesterday, clocked a time of 25.66sec over 200m to slice 0.33 seconds off her previous best set just two weeks ago.

“I really hoped to run fast as I knew the track was fast and the weather was good so I thought if there is a time to do it then it’s probably today,” she said following her fourth world record of the year.

“I am quite shocked about this PB (personal best) as it’s quite early in the season.”

In the same race, Italy’s Martina Caironi crossed the line in 32.32 to take 0.32 off her own T42 world mark and follow up her 100m record from yesterday.

“After my training this month I felt like I was in a good position but in this race I was really motivated by the other athletes who were running faster than me,” said the 25-year-old.

Kuwait’s Ahmad Almutairi posted a time of 30.06 in the T33 class to lower his own world record, set 15 months ago, by 0.28, while in the field the United States’ Rachael Morrison added 11 centimetres to her own world record in the women’s discus F51, throwing 8.71 metres.

In one of the several other 200m races, Australia’s Angela Ballard, who smashed the women’s 400m T53 world record on Friday (May 29), registered a winning time of 28.95 to fall just 0.02 outside the world mark, with America's Shirley Reilly in second and Great Britain’s Samantha Kinghorn third.

World champion Brent Lakatos clocked the fastest time of the year so far in the men’s T53, 25.55 seconds, to finish ahead of France’s Pierre Fairbank and fellow Canadian, but it was just outside the world record of 25.24.

The men’s T54 saw The Netherlands’ world and European champion Kenny van Weeghel fend off Thailand’s Konjen Saichon and Finland’s Leo-Pekka Tahti, who came second and third respectively, while team mate Margriet van den Broek posted the fastest time of the year as she won the women’s equivalent event ahead of Nigeria’s Hannah Babaolo and the US’ Hannah McFadden.

Tunisia’s Walid Ktila took the men’s T34 title with a time of 27.02 and was followed onto the podium by the United Arab Emirates’ Mohamed Hammadi and Finland’s Henry Manni, who added a European record to those he had already secured in the 400m and 800m earlier this weekend.

Multiple world and Paralympic champion Hannah Cockroft of Britain lived up to her billing once more as she comfortably won the women’s T34 in 31.32, while Switzerland’s Beat Bosch cruised to victory in the men’s equivalent with a time of 32.09 seconds.

The next leg of the IPC Athletics Grand Prix series is scheduled to take place in Grosseto, Italy, from June 12 to 14.

To view the results from Nottwil in full, click here.