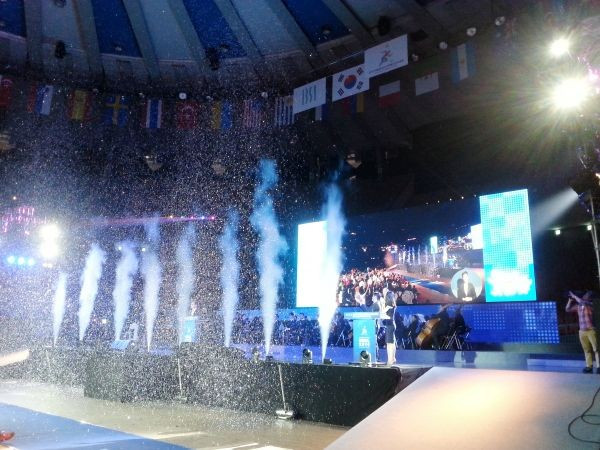 The International Blind Sports Federation (IBSA) World Games has drawn to a close with a Closing Ceremony held in the SK Handball Gymnasium in Seoul, South Korea.

Sally Wood-Lamont, President of the Romanian National Paralympic Committee and IBSA Europe chair, officially closed the eight-day Games on behalf of the IBSA, praising the efforts of the organising committee and volunteers for their work on staging the ten events, which made up the fifth edition of the event for blind and partially sighted athletes.

The Ceremony followed the completion of the goalball tournaments, which saw China bidding for gold in the men’s and women’s finals.

The London 2012 silver medallists began as favourites for the women’s goalball final, but fell to a surprise 4-1 defeat to Israel, who secured their first major title in the sport.

They benefited from the Chinese team receiving one illegal coaching and three noise penalties, with Elham Mahamid dispatching four opportunities to give her team a commanding advantage and with China only able to hit back with one goal of their own, Israel claimed a comfortable victory.

Israel had secured a tightly fought 4-3 victory over Canada in the semi-final yesterday, but the Canadian team were able to bounce back in the bronze medal match, as they cruised to a 5-1 triumph over Australia.

Despite their defeat in the women’s event, China still had the opportunity to earn goalball gold in the men’s competition as they renewed their rivalry with Lithuania.

Having beaten them on home soil at Beijing 2008, the Lithuanian team earned revenge by winning the 2010 World Championships in Great Britain.

China would have to settle for silver for the second time as Lithuania powered to a comprehensive 10-3 victory, while a lower scoring bronze medal match saw Sweden overcome Turkey 2-0.

Qualification for Rio 2016 goalball tournament from the World Games will not be confirmed until regional competitions have been completed.

The IBSA are set to announce launch the process to select a host for the sixth World Games, with all IBSA member countries encouraged to submit bids for the event.