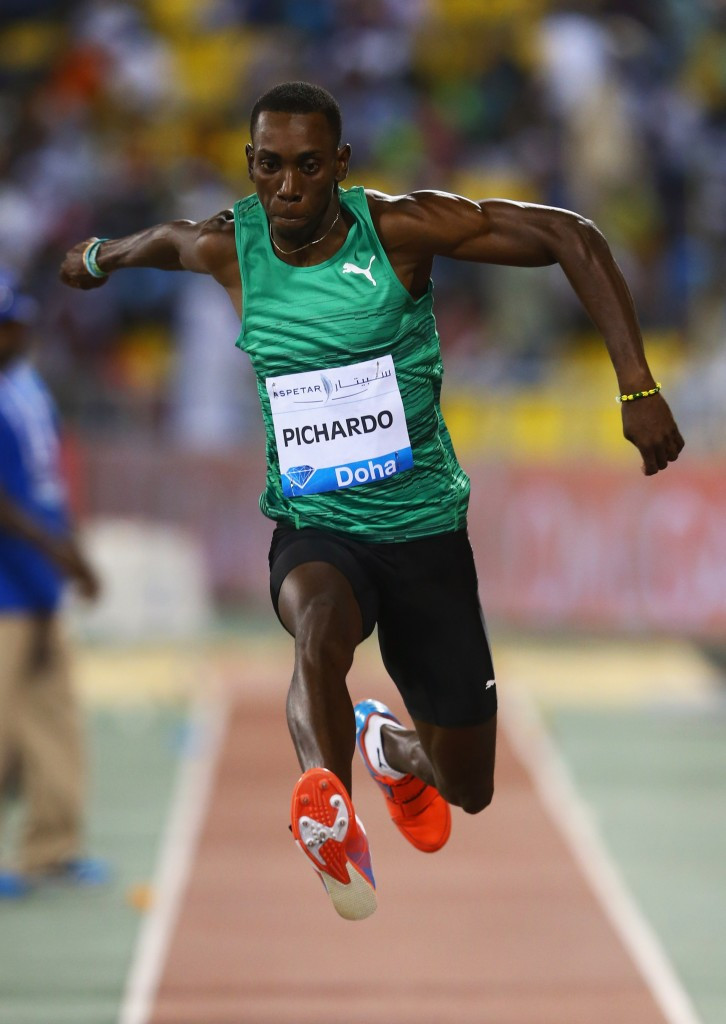 Pichardo, who set a Cuban record of 17.74 metres last weekend, clinched victory in the third round of the competition by leaping 18.06m, the furthest distance recorded since American Kenny Harrison’s Olympic gold medal winning jump of 18.09m at Atlanta 1996.

Taylor, the reigning Olympic champion, responded with his final jump of 18.04m, ensuring that for the first time in history two men had produced jumps of over 18m mark at the same meet.

It suggests Briton's Jonathan Edwards’ world record of 18.29m, set nearly 20 years ago at the World Championships in Gothenburg, could come under threat this season.

France’s Teddy Tamgho produced a season best effort before pulling up injured during his fourth attempt to finish third, although his 17.24m jump was some way off the level produced by Pichardo and Taylor.

The first leg of the 14 event series saw several world leading performances, which included serial drugs cheat Justin Gatlin become the sixth fastest man in the history in the 100m.

The 33-year-old American was the dominant force in 2014 and claimed a comfortable victory here, easing away from the field to finish in a swift 9.74sec.

His personal best performance was the fastest time since 2012, when Jamaica's Yohan Blake ran 9.69 in Lausanne.

Gatlin’s compatriot Michael Rodgers was the only other man in the field to dip below the 10 second barrier in 9.96, while Trinidad and Tobago’s Keston Bledman was third in 10.01.

While Gatlin’s victory was unlikely to have come to the crowd as a surprise, there was a shock result in the men’s 800m as the anticipated showdown between Kenya’s Asbel Kiprop and Ethiopia’s Mohammed Aman failed to materialise with Djibouti’s Ayanleh Souleiman taking victory with a world lead of 1min 43.78sec.

Olympic 5,000 and 10,000m champion Mo Farah opted to compete over the shorter distance of 3,000m in Doha, but finished second after being unable to overtake Hagos Gebrhiwet in a thrilling sprint to the line, with the Ethiopian stopping the clock at 7:38.08.

Farah admitted that it was difficult to “change gear” in the closing stages but was positive after choosing to start his season earlier than in previous years.

“Training was going well in Arizona and I wanted to test myself to see where I am at the moment,” the Briton said.

“It is a bit disappointing as I had started the season well in Birmingham and in [the] Lisbon half marathon, but it shows anything could happen.”

There was another surprise winner in the women’s 3,000m steeplechase as pacemaker Virginia Nyambura took victory in 9:21.51 ahead of Ethiopia’s Hiwot Ayalew and her fellow Kenyan Hyvin Kiyeng.

The was further success for the United States as Jasmin Stowers and Bershawn Jackson triumphed in the women's 110m hurdles and men's 400m hurdles with world leading performances of 12.35sec and 48.09sec in their respective events, while world junior champion Saw Seyaum of Ethiopia upset The Netherlands' Sifan Hassan to win the women's 1500m, finishing in 4:00.96.

In the field events Greece's Konstantinos Filippidis took advantage of the absence of France's Renaud Lavelline, forced to withdraw through injury, to win the men's pole vault in 5.75m, while Germany's David Storl won the shot put with a throw of 21.51m and Finland's Tero Pitkamaki's effort of 88.62m saw him win the javelin.

Croatia's Sandra Perkovic, winner of the 2014 Diamond League, was once again victorious in the women's discus after throwing 68.10m, while the United States Tianna Bartoletta posted 6.99m to win the women’s long jump and Lithuania’s Airine Palyste produced a best effort of 1.94m to claim maximum Diamond League points in the high jump.