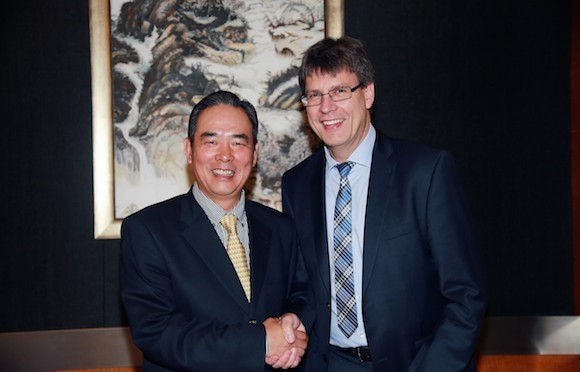 The Asian Table Tennis Union (ATTU) will be brought under the International Table Tennis Federation (ITTF) umbrella following the signing of a historic agreement.

The affiliation, which was agreed at the sport’s world governing body board of directors meeting held on the fringes of the World Table Tennis Championships currently taking place in Suzhou, China, comes after the move to formally recognise continental federations within the ITTF structure.

It is hoped it will allow for greater co-operation in all areas, particularly in marketing and the global development of table tennis.

"With this morning's signing with the Asian Table Tennis Union at the ITTF Board of Director's Meeting, I believe this will signal a new era of co-operation not only between ITTF and ATTU, but also personally between [ATTU President] Mr Cai Zhenhua and myself, and I look forward to working closely with both ATTU and Mr Cai for the development of table tennis worldwide,” said ITTF President Thomas Weikert.

The meeting also saw members voting against a motion to potentially change timeouts in team events.

However, the Athletes Commission spoke against the motion and so the meeting supported the athletes and also voted against.

Other decisions made included the reduction to one year from the previous three of the time an under-15 player has to wait to change nationalities, while coaches will have the opportunity to coach between points from October 1, 2016.

The Japanese pair will now take on mixed nations duo Xu Xin of China and South Korea’s Yang Haeun for the title.

“Our goal is to perform our own ability, and we have confidence to play in our own level,” Ishikawa said.

“I feel good and I think it was within my control,” Zhang said.

“This is the first time that Liang participates in men’s singles and it wasn’t easy for him to win so smoothly in the first and second round.

“Just like last Championships, Fan Zhendong also lost to me in the third round.

“So I also hope that Liang can enrich himself in the following training and competitions.

The Championships continue tomorrow with the round of 16 of the men’s and women’s singles and the mixed doubles final.