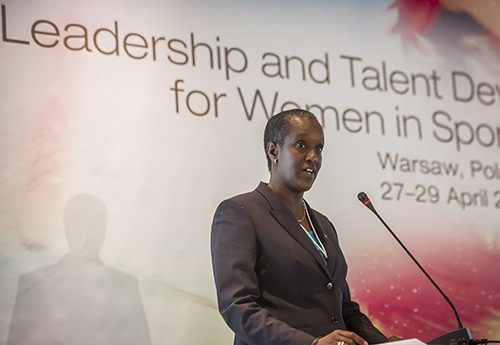 The international Women and Sport Seminar has taken place at the Polish Olympic Committee headquarters in Warsaw with the nearly 70 participants reflecting back on how far gender equality in sport has come in recent years.

Daina Gudzinevičiūtė, chair of the European Olympic Committees (EOC) Gender Equality in Sport Commission, and Russian long jumper Tatyana Lebedeva, who is a member of the EOC Athletes’ Commission, were also in attendance.

Polish Olympic Committee President Andrzej Kraśnicki and Minister for Sport and Tourism Andrzej Biernat welcomed participants to the Forum, which discussed the place and role of women in contemporary sport.

Szewińska and Nsekera recalled the past difficulties women faced within the Olympic Movement and how it was not until 1981 that the first two women, Pirjo Häggman of Finland and Venezuela’s Flor Isava-Fonseca, became part of the IOC.

Today, every fourth member of the more than 100-strong body is a woman and four women so far have sat on the IOC Executive Board, with one, Nawal El Moutawakel, a vice-president.

Local policies in different nations were also discussed, as was the European Union’s efforts to promote sport among women.

Meanwhile, the event saw the presentation of the annual Polish Olympic Committee Women and Sport Commission awards, with Aneta Szczepańska taking Coach of the Year honours and Thomas Różański being given the Coach Working with Women prize.