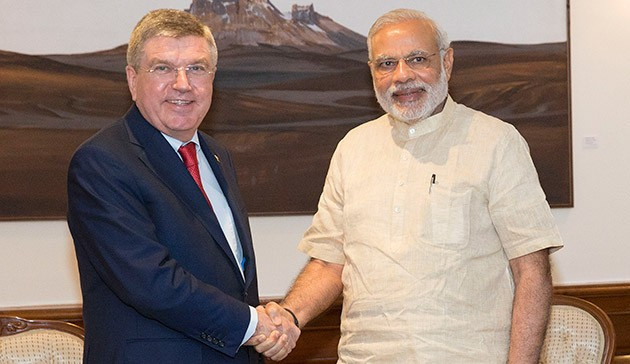 International Olympic Committee (IOC) President Thomas Bach has ruled out an Indian bid for the 2024 Olympic and Paralympic Games, claiming it has come too soon for the country.

Speaking at a news conference after a meeting with Indian Prime Minister Narendra Modi, which had fuelled rumours that India would bid for the Games, Bach dismissed its chances but said it could enter the race in the future.

The Indian media had been speculating about a possible bid from New Delhi, host of the 2010 Commonwealth Games, and the city of Ahmedabad.

“Frankly, we were a little bit surprised about this speculation [of a potential Indian bid],” Bach said.

“Because of different reasons we think it will be a little too quick for India to have successful Olympics in 2024.”

According to Bach, Modi admitted he was eager to get an Indian bid up and running but understood that the world’s second most populous country was not quite ready to host the world’s biggest multi-sport event as early as 2024.

Bach claimed India is a “sleeping giant” that the IOC will try to “wake up”, seemingly leaving the door open for the country to throw its hat into the ring in upcoming Olympic and Paralympic Games bidding races.

“He [Modi] considers building a successful candidature from now till September will be a little difficult but we will stay in contact for the future,” he added.

“India is a sleeping giant and we will try to wake it up.

“With 1.2 billion people and 80 million of them young, it has a lot of potential.”

It was originally claimed that the Indian Olympic Association (IOA) was worried about lodging a bid due to the fact that Tokyo won the rights to stage the 2020 Games.

But Bach claimed it would not be a problem hosting consecutive Olympics and Paralympics in Asia, insisting it "would come down to how strong the bid is and the votes they manage".

It is claimed the IOA sees it as an opportunity to restore some pride following Delhi 2010, which badly damaged the country's reputation for organising major events.

Widespread criticism was levelled against the organisers for the slow pace of work and there were countless issues relating to security and hygiene.

The relationship between the IOC and IOA has been fractious in recent years following the IOC'S decision to suspend them in December 2012 after a row broke out between the two parties linked to Delhi 2010.

During the meeting, Bach and Modi agreed to sign a Memorandum of Understanding which will see the IOC, the Indian Government and the IOA cooperate more closely in order to develop sport in India.

Boston, Hamburg and Rome have all confirmed their candidacy for the 2024 Games and Paris is expected to follow suit, with the deadline for the declaration of bids to the IOC being September 15 this year.

The IOC will then elect its chosen host city at its 130th Session in Peru's capital Lima in 2017.