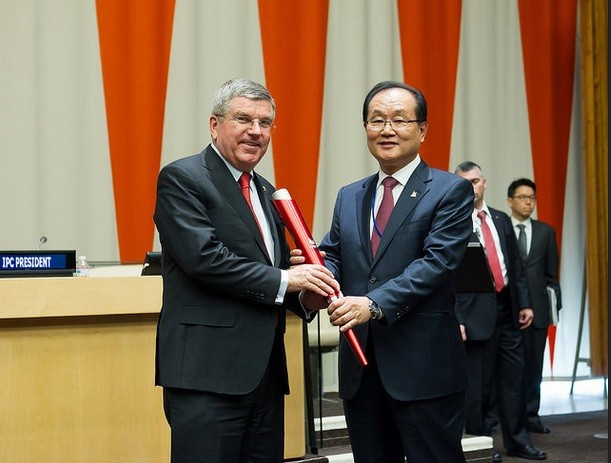 At a special meeting to celebrate the day at the United Nations (UN) headquarters in the American city of New York City, Bach was handed the Torch as a surprise.

During the event, also attended by UN secretary general Ban Ki-moon, Gwangju 2015 were given a 30-minute segment in which they promoted the upcoming Summer Universiade, due to be staged in the South Korean city from July 3 to 14.

Gwangju 2015 showed the prestigious attendees a short promotional video, which was well received, and they also discussed international sporting agendas with key figures and journalists alike.

They displayed and presented their EPIC initiative - eco, peace, IT and culture - which they have adopted in close collaboration with the UN since 2012.

“As the city of Gwangju is known for democracy, peace, and human rights, the 2015 Summer Universiade will flourish in peace with the city’s dedication and support,” Kim Yoon-Suk said.

The event itself, which celebrated sport’s role as a tool for social change and peace, saw a host of top names, including Bach and International Paralympic Committee (IPC) President Sir Philip Craven, speak to the attendees on a range of subjects to celebrate a momentous day in the sporting calendar.

The Summer Universiade in the South Korean city is expected to attract around 20,000 participants from 170 countries to compete in twelve days, across 21 different sports.